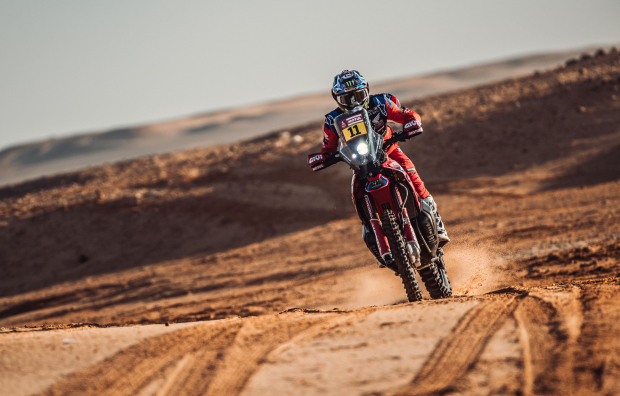 With renewed vigour after yesterday’s gruelling stage, Monster Energy Honda Team riders once again went for broke on a tough stage. Nacho Cornejo and Ricky Brabec stood out at the end of the special, with Barreda and Quintanilla opening the track.

The first of the two looping routes in Riyadh got underway today, where – for the first time in Dakar history – the motorcycle riders rode the entire stage completely autonomously from the car and truck categories. The fifth stage of the rally was battled out over a 346-kilometre special stage, covering hard and stony ground and including, towards the end of the day, a 50-kilometre stretch of dunes.

José Ignacio Cornejo’s riding had significantly improved from the previous days and this was reflected in the results. An error-free stage, with speed and deft navigation saw the rider reach the end of the special with the day’s second best time for a RallyGP rider, at 0’03 from the stage winner and leapfrogging two positions up the general standings.

Behind the young Chilean, American rider Ricky Brabec also turned out a satisfactory showing. The Monster Energy Honda Team rider, third on the RallyGP day class, was able to claw back several minutes from his closest rivals and, furthermore, regain the good sensations. Brabec finished 1’30” behind the day’s winner and moves up one position in the rankings. Pablo Quintanilla and Joan Barreda were lumbered with the troublesome task of opening the track this morning in the middle of a sandstorm. At the end of the interrupted stage, race authorities are still weighing up different options on how to classify the riders who had finished and to decide what to do with the rest of the riders involved. Quintanilla and Barreda were, nonetheless, able to make it through to the end of the special. Quintanilla and Barreda both remain in contention for the overall race victory. However, Joan suffered a fall and the Spaniard is still unsure whether he will be 100% fit to battle for another stage win. In tomorrow’s stage, the Chilean and the Spaniard will start from behind and will attempt to make up the time dropped today.

The final stage of this first week of the Dakar takes place tomorrow. A second loop to the capital of the country north-west of Riyadh will once again put the riders to the test with 402 kilometres of timed special stage. It will be physically demanding given that it is the same route completed by the car and truck drivers the previous day, so riders can expect churned up, rutted conditions with dust, sand and hidden stones. In the dunes, the many lines will force riders to be particularly attentive to the navigation. At the start, there will be several track crossings and, towards the middle of the special, some forty kilometres of dunes before the fast tracks that will wrap up the day. The bike odometers will be registering 618 kilometres by the time the bikers make it back to the bivouac in Riyadh.

Day five. One day before the rest day. It was a good day. We started off a little bit slow this morning. We were a little bit cold. The navigation was really tricky in the morning. Not super tricky as far as technical goes, but a lot of quick notes and a lot of quick turns. We really didn’t start picking up the speed until kilometre 60. For me, to get going this morning was a little bit tough but I managed OK and made it to refuelling. After refuelling it started to open back up. There was a sandstorm. It was wild; you couldn’t see much. One more day to rest day. We’ll keep on fighting to the end.

Today's stage was very complicated in terms of navigation. In the morning there were a lot of changes of direction and the tracks were not very visible. It was very difficult to navigate in some sectors. I had a good pace until the refuelling. After refuelling I caught up with Joan and we kept pushing. We encountered a sandstorm with little visibility to find the tracks. Overall it went well, with no navigation errors. We knew that today we would lose some time when opening the track and that we would leave it to the guys behind us. It was also important not to make any mistakes with the navigation. I stopped around kilometre 250 to help Joan, who had fallen. Luckily, he was able to recover and finish the stage. In the dunes, the sun was high and we couldn't see the depth of the dunes. We reached the end of the special stage. Tomorrow will be a new day with a new opportunity. We have some good pace, with speed, and we will have to think about the strategy a bit and reduce time in the general standings over the next few days. Anything can happen.

Finally I was able to ride a solid stage, without mistakes and with some good pace! I felt very good. It was quite a complete stage, with fast and technical sections, with rocks, and another part with dunes, which was fun. I had a great time. I was able to hold a strong pace, without making navigation mistakes and I'm happy about that. I was able to improve a bit in the general standings, but everyone is really fast. If we can have a few more days like today, I think we could make a lot of progress. Tomorrow is the final stage before the rest day, which will be good for the body and mind. But I'm motivated and for me, I'd keep going on days like today. We're going to keep fighting.

I think I rode a good stage. We opened the track with some good pace all morning even though we didn't have very good visibility. We encountered a sandstorm and it was difficult to find the reference points in the roadbook, we were almost blind. Even so, we managed to get to the refuelling point without losing too much time. After the refuelling, around kilometre 250, we entered a river and I think I hit my rear wheel on a stone and fell hard, hitting my left shoulder, in the collarbone area. My team-mate Pablo Quintanilla helped me to get back on my feet and keep going. It was very hard to get to the end, especially in the dunes, but I made it to the end. 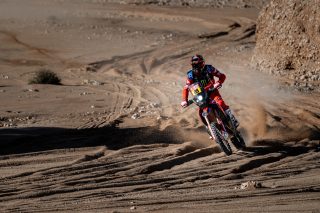 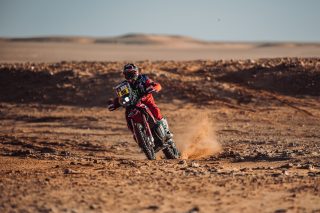 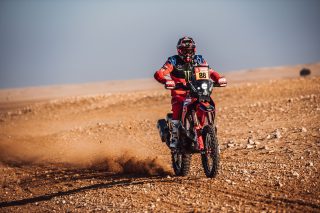 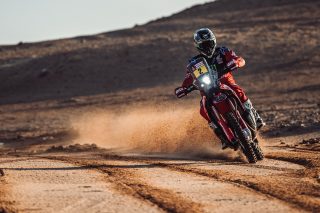 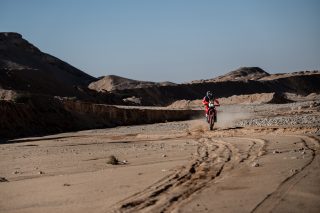 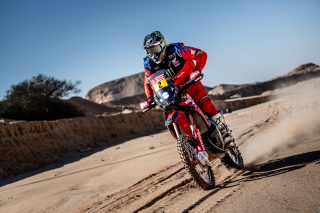 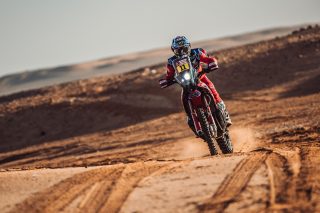 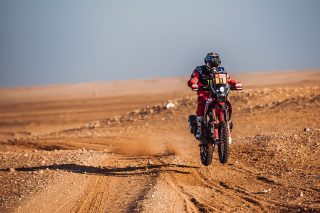 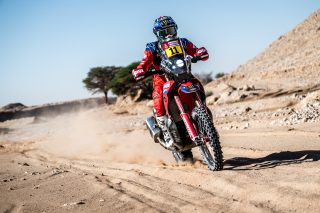 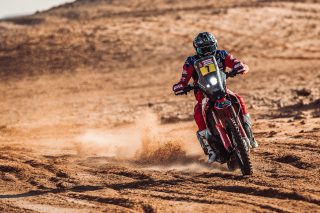 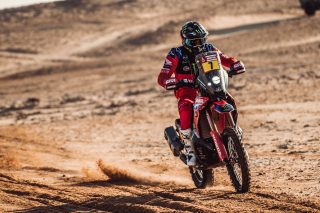 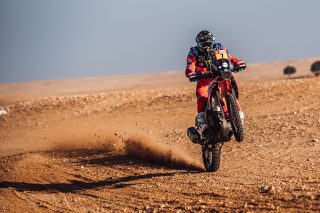 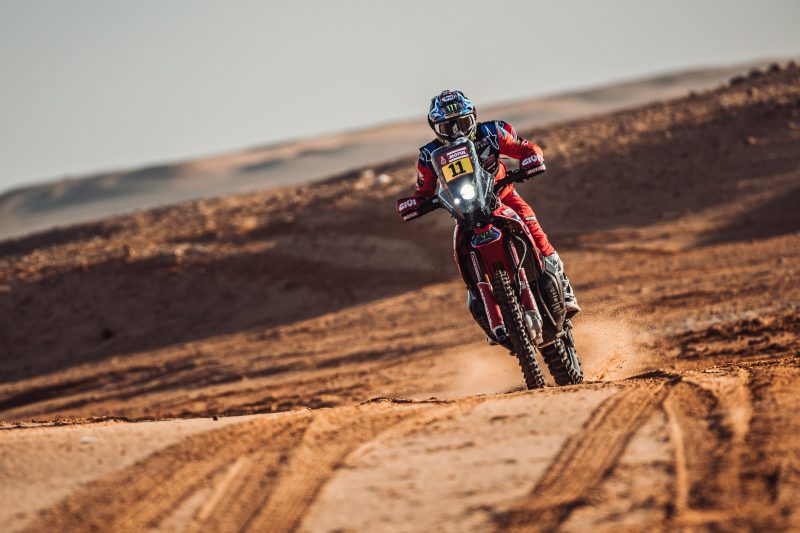