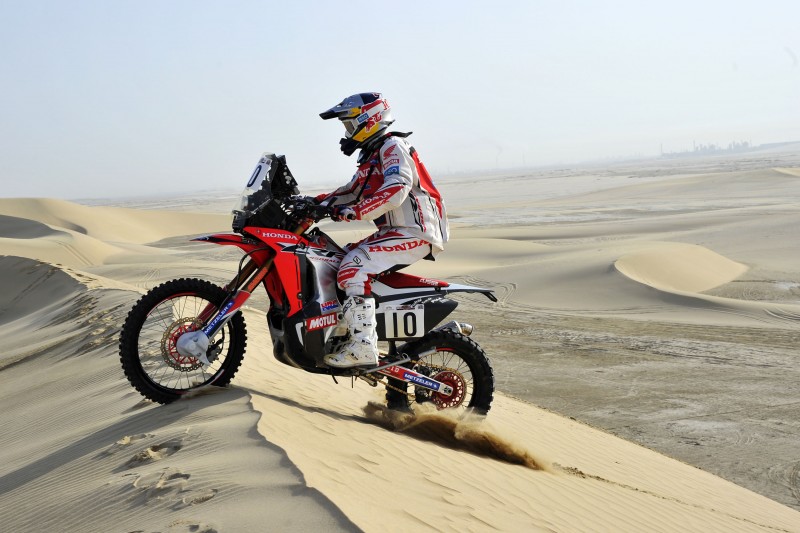 Another great win for Team HRC in the fourth stage of the Sealine Cross-Country Rally disputed today in Qatar. Paulo ‘Speedy’ Gonçalves picks up first place in the stage aboard the Honda CRF450 RALLY, the third for the team so far in the competition.

The three Team HRC continue their run of excellent results and maintain the squad with great options for the final classification in the Sealine Cross-Country Rally as the race heads into tomorrow’s final stage.

Today was the turn of Paulo Gonçalves, who put his skill at handling and high speed on display for all, as he clocked up the fastest time in the Sealine’s fourth special, a 404 km affair across the Qatar desert in the Arabian Gulf. The Portuguese rider made up for lost time in the overall standings, and now lies just 17 seconds away from a podium place.

Fellow-countryman Hélder Rodrigues, also got a good result today, pushing hard and managed to be the fastest rider throughout most of the race. After finally dropping a little time, he concedes his overall leadership place to his team-mate.

Joan ‘Bang Bang’ Barreda, set off knowing the importance of controlling the race and keeping his close competitor at Marc Coma at bay. Barreda finished fifth, with a good chance of taking overall victory as he now finds himself just 41 seconds behind the leader.

Tomorrow sees the final stage of the Sealine Cross-Country Rally, with some 363 km against the clock, with the final finish-line back where the race set out from in Umm Sa’id.

"I had a really good race day. I won the stage but more important is the time that I pulled back from my adversaries after the mistake with the navigation on the first day. My focus is to be on the podium at the end of the rally. But we have to keep our eye on the target and stay focused, because tomorrow we have 270 kms still to race and it's easy to slip up and make a mistake, so we'll wait and see what happens."

"One more day in Qatar for us. It was a good one. I pushed hard and managed to catch up with Marc and Joan and we stayed with them for some kilometres. After the refuelling I pushed harder in the stage. I arrived at the refuelling in a good position to be in the fighting for the third position. After we dropped a bit of time to Joan and Marc and Viladoms caught up with us. The final part of the stage was to try and keep Joan controlling Marc and be in with a shout for the podium, although it will be difficult for me."

"We had a good day today. We finished in fifth. I started out opening the way and after a few kms Marc caught me up. The stage went according to plan, in fact, everything has gone the way that we hoped. Very good. I'm very pleased. Tomorrow we will try to stay focused and be careful with the navigation to try and catch up with Marc and win the rally."

"Fourth stage in Qatar; another very successful day for Team HRC Rally. This stage was won by Paulo Gonçalves. A great third place for Hélder and fifth for Joan Barreda. Everything went according to plan. There was a lot of tricky navigation towards the final part, and the riders began to form a group arriving at the finish-line together. Tomorrow is the last day. We have to stay focused on bringing home a great result. Everything has gone really well so far." 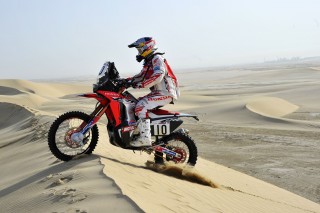 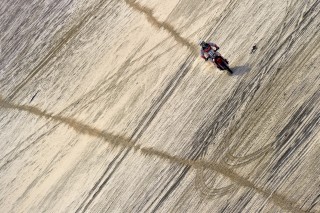 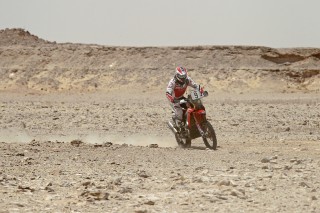 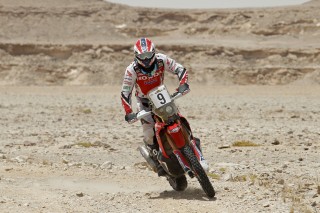 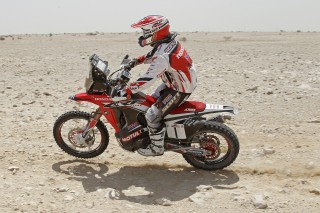