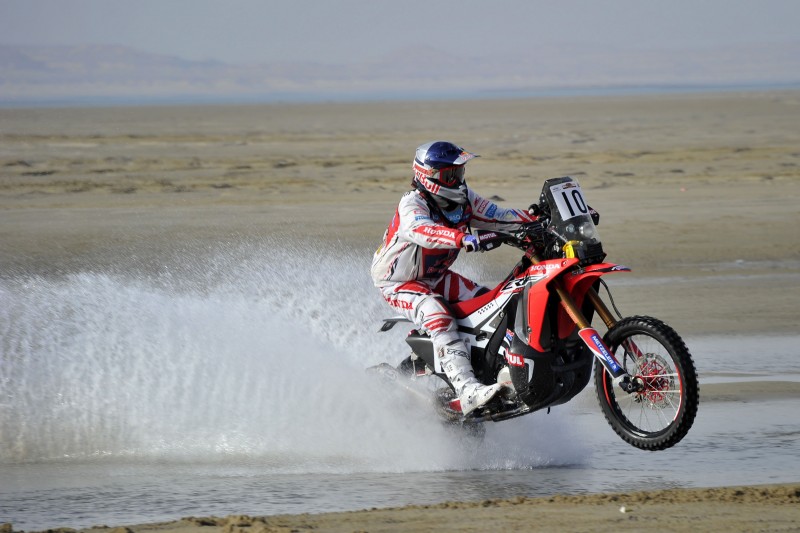 The third day of the Sealine Cross-Country Rally put Joan Barreda back on the top of the leader-board in what proved to be a great day out for Team HRC, imposing a cracking pace and taking the stage victory.

Qatar’s Sealine Cross-Country Rally thus arrives at its halfway point, and the riders of Team HRC are well placed among the race’s leaders.  Joan Barreda set off from sixth place on the Honda CRF450 RALLY at a thundering rhythm, and with flawless navigation was able to reach and overtake the rivals ahead, crossing the line in Umm Sa’id for his second win so far. At 411.76 km, the special is the longest of those to be disputed here at the Sealine. The win sees Spanish rider Barreda once again back on the top of the overall standings, with all options open as the race goes into its final phase.

Hélder Rodrigues took fourth place, after a speedy start. Once he caught up with the leading group, he held his ground until the end, earning the Portuguese rider fifth overall place after three days.

For Paulo Gonçalves it was likewise a positive day in spite of a fifth place finish. We watched as Barreda was able to pull up to him. The reigning world champion and current leader of the world championship lies in fourth place, and will be fighting to improve on the position over the final two days.

"Today I’m really happy because I started out in sixth place after yesterday’s position. I kept up a really good rhythm from the first kilometres. I caught up with Marc at kilometre 30 and then Viladoms. I kept pushing really hard to try and catch up with Paulo and Sam, and finally, after refuelling, with some difficult areas and navigation, I reached them, and we finished altogether in a group. So, I’m really happy with another victory, and also a victory for Honda."

"One more day in Qatar. A long stage with a lot of navigation. In the beginning there was a very high speed. Marc and Joan caught me and kept up a good rhythm until the refuelling. Then after the refuelling everyone went off together in a group until the finish-line. I think that it’s a very close race, but Joan has a bit of a margin to win the race. It’s good for us and good for Honda. Paulo and I will be in there fighting for the first place. I’m happy with the day. I’m pleased with the result and am also happy with the team result. Everyone’s pleased."

"Again it was a very hard day. I started in second position overall and we had a lot of really difficult navigation and we were able to really pick up speed in the special. But after the refuelling navigation got very tough, and we lost some time, and the riders who started behind Sam and I caught up with us, and we all arrived in a group. I lost a little time today but I will try and make it up tomorrow."

"The third stage of the Sealine rally was crowned by another stage victory of Joan Barreda. Overall a very good day today. He started at the rear and was able to pass all the riders in front of him, arriving first at the finish-line. Also Helder Rodrigues was in the top group, finishing third; and last but not least Paulo Goncalves was able to keep up with the guys at the head of the course, and is now fifth overall. Now they have very good positions, with the possibility of a very good final result in the rally. The bikes went great and everything is perfect so far." 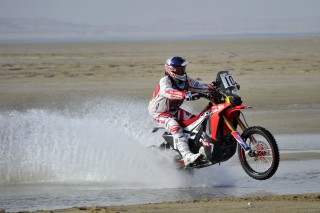 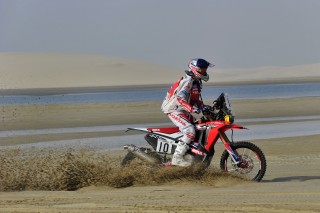 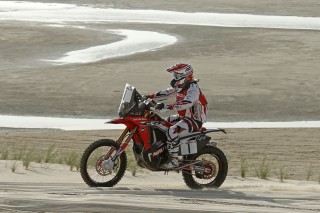 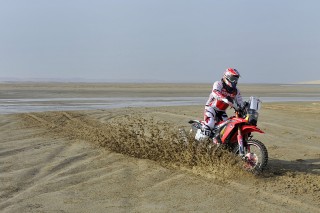 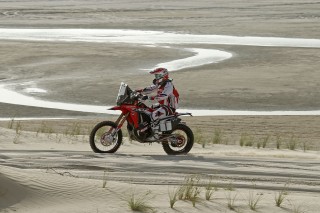 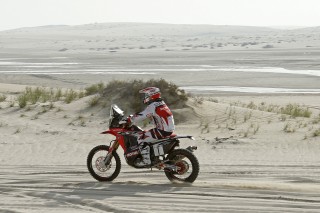