August, September and early October were a frenetic period for Team HRC with four races in different corners of the globe. The action has eased up… but preparations continue to go ahead.

After claiming victory in the Vegas to Reno and gaining good experience in the Atacama Rally in August, Team HRC’s riders returned in September to dominate the China Grand Rally from start to finish. Joan Barreda and Michael Metge excelled behind the bars of the Honda CRF450 RALLYs in an attractive yet challenging rally.

On-form Spaniard Joan Barreda, not only took the overall triumph, but rode to victory on every single one of the nine stages disputed. Barreda becomes the first rider to have made a clean sweep in any the four editions of the event.

Michael Metge too was up alongside Barreda on various days of the rally, finishing in runner-up spot on several occasions. The team were able to witness how the Honda CRF450 RALLY performed without a hitch over more than 4,000 kilometres of rally.

The remaining part of Team HRC chose to take part in the two final rounds of the FIM Cross-Country Rallies World Championship in the Atacama Rally and the OiLibya Morocco Rally. Paulo Gonçalves, Ricky Brabec and Kevin Benavides continued their particular agendas to clock up more mileage on the bikes. In Chile, both Paulo and Kevin were in contention for top positions. The Argentinean made it on to the podium and Paulo narrowly missed out, to take fourth overall place. In Morocco the team was reminded that no one is immune from mechanical mishaps and accidents in motorsport. A series of setbacks left the squad without the possibility of savouring success. Now comes the time to knuckle down to the task of getting Team HRC into the best shape possible for the ultimate rally showdown: the Dakar.

Over the coming days, Barreda, Gonçalves, Metge, Brabec and Benavides will be subjected to a tough fitness regime which will involve – among other things – medical check-ups and altitude training.

Can you watch the video here.

The end of August and the first week of September saw Team HRC involved on two fronts: the China Grand Rally and the Oilybia Morocco Rally. We were able to experience two different types of rally simultaneously and put the riders, bikes and team through a tough test.
It was particularly important to carry out this kind of schedule. In fact, in China we were able to win without the slightest hitch with a lightning performance from Joan Barreda and the third step of the podium for Metge. Meanwhile in Morocco, the situation proved to be far more problematic.
In both races, however, the quality of Team HRC’s riders was well on display. At the halfway point in Morocco, we had the three riders occupying the top five positions and we had clinched two of the three stages disputed.
Now, we have several weeks of intense technical and engineering work ahead to find out what happened in Morocco. Meanwhile, the five riders will undergo several days of physical tests with the University of Kent with whom we liaise as medical / sports consultants. This will be with the collaboration of Prof Samuele Marcora and the medical supervision staff at Team HRC Rally, comprised of Doctor Pierluigi Tettamanti and Doctor Luigi Vanoni.
I wish to thank all Team HRC’s collaborators for the intense activity over the last few weeks, as well as all the fans that follow us on this fantastic project.

Either leave this blank or provide a brief description about the video and what it is showing. 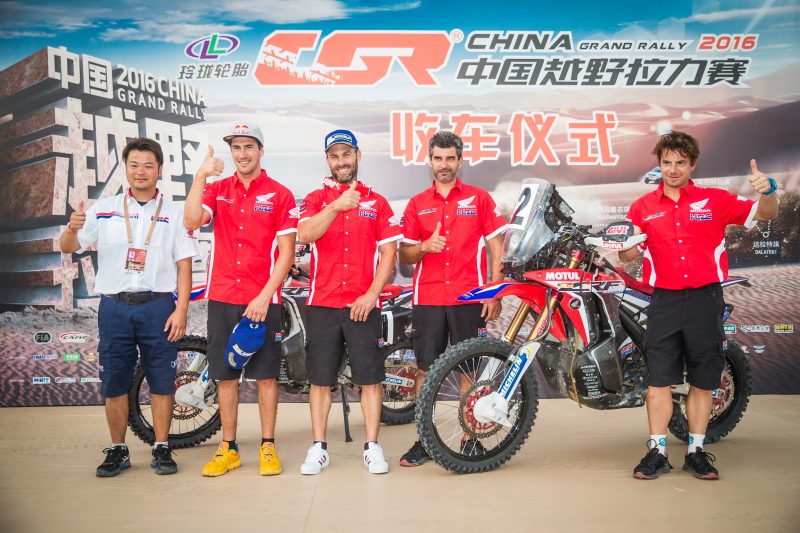