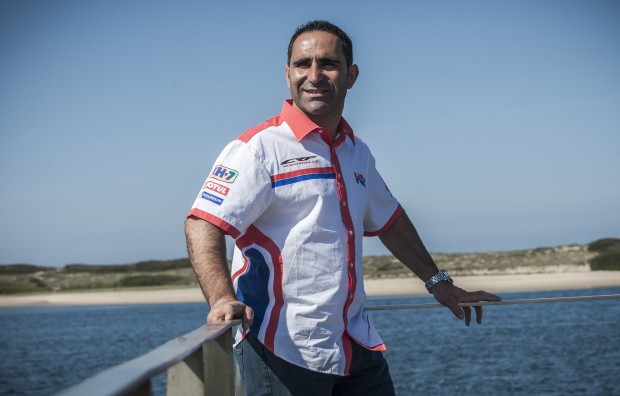 The greatest achievements of Paulo Goncalves’ rally riding career have come since signing for Team HRC several years ago. These successes include clinching the 2013 FIM Cross-Country Rallies World Championship and taking runner-up position in the most recent edition of the Dakar Rally.

Historically, Portugal has a habit of producing great adventurers. Names which include New World discoverers, conquistadors… and rally-raiders! Portugal, a land steeped in rally tradition, hosted the start of the last two African editions of the Dakar and has also produced one of the great contemporary specialists; Team HRC’s Paulo Goncalves. In Esposende, in his hometown, the Honda star flanked by wife Sofía and children Erica and Ruben, providing additional motivational support, will be in attendance as the Sealine Qatar Cross-Country Rally – the second rally of the 2015 world championship – gets underway this weekend.

After the second place in the Dakar 2015, you were back in action in the Abu Dhabi Desert Challenge. What sort of form is Paulo Goncalves in?
I’m here two months after the end of the Dakar where I picked up second place and I’ve got a bit of rest. I’ve restarted work and am looking forward to fighting once again for the world championship after a couple of problems in the last race’s penultimate stage left us without the chance of winning.

Dakar 2016 details are to be announced tomorrow, but Chile won’t be included. That’s a great pity.
Yeah, that’s the way it is. Chile has been a really important part of the Dakar. Atacama has always been synonymous with the toughness and the surprises in the way the race plays out. The heart of the South American rally is largely there. I don’t know what the organisation will do to make up for the absence, but with the experience that they have, I’m sure they will be looking for a solution. It’s a shame Chile won’t be included, but the Dakar 2016 will continue to be a tough, hard Dakar.

The 2014 Dakar was a terrible one for you, but you made amends but finishing on the podium in 2015 with a great chance of actually winning the rally, for both you and the team.
It’s true that 2014 didn’t work out right at all. Two months earlier I had been enjoying the world championship title, then in stage five of the Dakar I was out of the race. I had great hopes but everything went down the pan. It was a really hard moment for me, but I kept my head up and made up my mind to support my team-mates. The Dakar finished, then I spent the rest of the season fighting for the world championship until the final race. In the end, I wasn’t able to hang on to the title, but had to accept second place.
We went to the Dakar 2015 with the whole team determined to be in the running for an overall win. We knew that the team was strong and well-prepared. Joan was ahead with a good margin and I was battling for the podium. Unfortunately the Uyuni Salt-flats left Joan out of the race and I lost time that day too, but was more fortunate than the other team-mates and was able to stay in the fight for the victory. After a great battle I finished runner-up. It was a great way to put the accident of the previous year behind me and a fine motivation for the team that so wants to win. The path is paved and the moment for a win for us will arrive.

In the Dakar your team-mates helped you to overcome some complicated moments.
Yes. I had some troubles in the second marathon stage that I wouldn’t have been able to overcome without the help of my team-mates. That is the strength of our team: we are well-structured and the team functioned in the best way. Jere made a great sacrifice so that we could keep battling for the podium; Joan, Hélder, Jere and I worked until it was time to start and the team was rewarded with a second place finish. This is one of the great values that the team has; that it works really well together. All the team for Honda and Honda for the victory!

To win stages and have a good team. 100% Honda philosophy.
The Honda philosophy, ever since I’ve been racing, has been to win races. The work that we undertake in all the competitions that we enter, is done to win: stages, races… and if we don’t, we have to think that we are competing with strong rivals who are also well-prepared. But Honda always starts out with clear chances of winning. The machines, the team, the riders… the whole outfit sets out to win. I think that there hasn’t been a single rally since Honda came back that we haven’t won at least one stage in. We still haven’t achieved the ultimate goal yet, which is to win the Dakar, but if we carry on like this, it will come.

Some of the characteristics that define you as a rider are your stamina and your sacrifice. As much in your preparation as in your family life, which is very important for you.
The riders, at this level, are professionals who know how to do the job. Luckily, we have a job that gives us great pleasure and that motivates us on a daily basis. We’ve been chosen to take a place, but it’s got to be won.
You’re right. My family is very important and it brings me a lot of stability and makes me happy. It’s not easy when you are away for two or three weeks at a time and you have a six-year-old and a four-year-old, but it happens to other people too. You have to find a way not to let the strength or the concentration wane.

Are your kids very demanding? Do they always want dad to come home with the trophy?
What they want is that dad arrives back safe and sound. That’s the most important prize for them. We do a high-risk sport and the external factors that affect the race have always to be considered.
But they do always ask if I have won. But I have to let them know that dad is in the running with a lot of other very well-prepared riders with the same set of objectives. When you don’t win, you have to know how to respect and value the one who does. We shouldn’t make kids believe that it’s all about winning or losing. They should learn to respect and give it their best. Then the win will come. And if not, it’ll come next time, but you have to be satisfied with the job done.

With values like those, pretty soon they’ll be overtaking their father!
At the moment they are still too small to race. I’ve no idea if they will ever actually want to race! I’m not pressuring them into it. If they ask, then I’ll try and help them to do it well.

Patience is another of your virtues.
After more then twenty years you realize that things don’t always work out the first time around and you have to wait for the right moment. One has to value those around you at all times, especially when things are not going well. Our competition is like a marathon: the race isn’t won in the first minute or in the first kilometre, but is a continual battle.

If we take a look back, after a great career in motocross, you moved on to rally, a speciality where you’ve achieved many successes.
I ran my first Dakar ten years ago, but I wasn’t competing in rally, just in the Dakar. I came from cross and thought that the Dakar was won from the first kilometre. Obviously the results didn’t come because I fell a lot and I didn’t have a clue about navigation.

About four years ago, the Speedbrain team gave me the chance to leave MX and enter the world of rally. It was a great change and over the last few years I’d been in the running for the world championship and I managed to win it. And now with the latest result in this Dakar, we’ve got a team that allows us to work with the best equipment and I’m pleased to have got such a result. The last three years have been the best of my race career and are getting better and better.

After so many years racing, this is the greatest moment of your career; with the best weapon and the best team-mates… where you’ve ceased to be an outsider and have become a contender for victory in any race that you compete in.
At 36 years of age, I’ve got the best bike, the greatest team and over the last two years, the best results of my life; a world championship title and a second place in the Dakar. This is a motivation. In a certain way, 36 is getting on a bit. Maybe I’m maturing like a bottle of Port…. At 20, 25 or 30 I was never able to get results like that. But now I’m raising the level and improving the performance, but this is also due to having a great team behind me.

The next big test is the Sealine Qatar. The race is very different from the Abu Dhabi Desert Challenge, without as many dunes, but with very tricky navigation.
With a lot of stony track and a lot of navigation, finishing the stages in the dunes, almost all together. There’s about 20% sand and 80% navigation. The HRC objective is to continue to develop the bike, as our chances of taking the world championship title are reduced after the results in Abu Dhabi. That’s why there will be less pressure. We’ll go into it much more relaxed and we can test out the navigation and the bike.

What’s your opinion about the new rule of being able to choose the starting position in the following stage?
The rule doesn’t seem fair to me. In Abu Dhabi it worked to my advantage, but it still doesn’t seem right. I hope that it gets changed, because it’s not the correct method. A race should be won by racing. If the race forces you to stop before the finish-line to have a chance to win the race, it’s no good. If you can choose between the first three starts for the following day, then maybe it would be fair. I suppose that the rule will get modified soon. 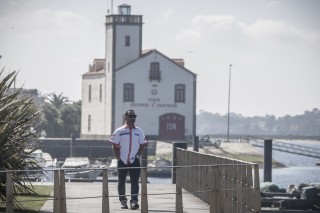 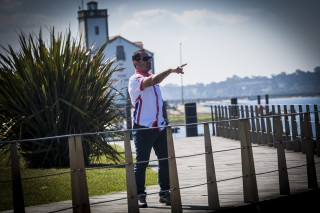 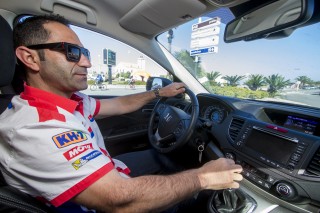 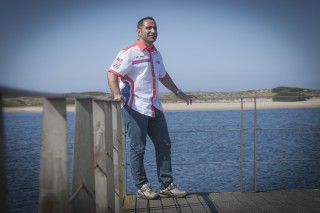 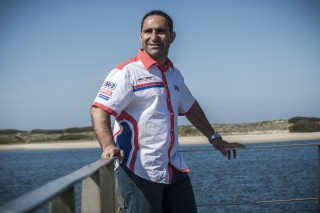 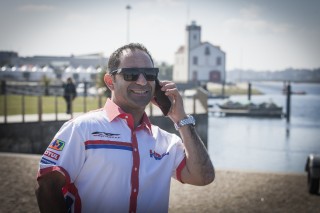 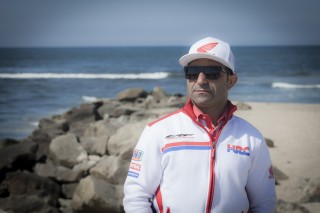 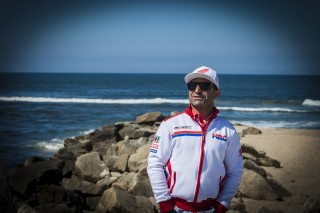 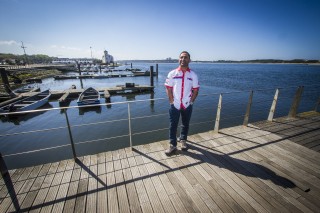 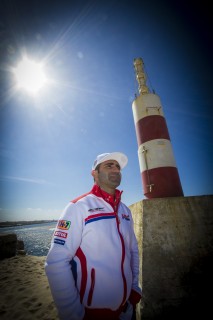 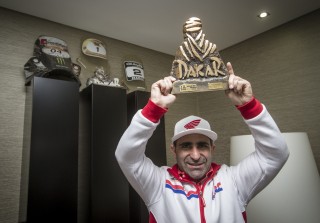 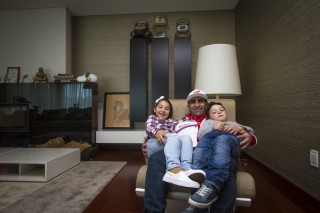 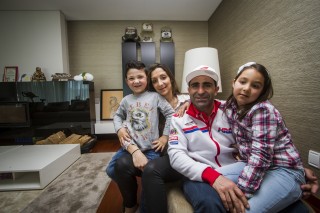 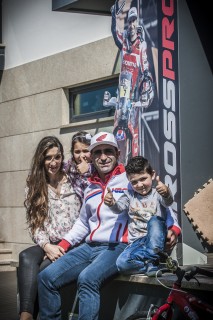 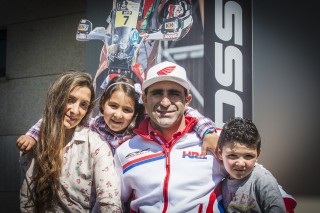 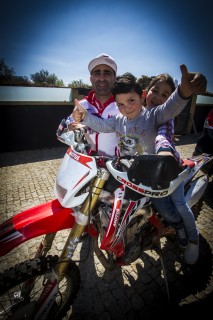 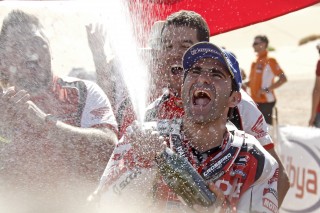 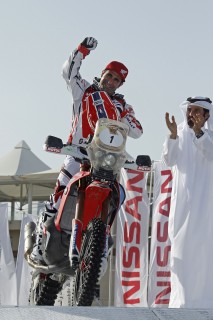 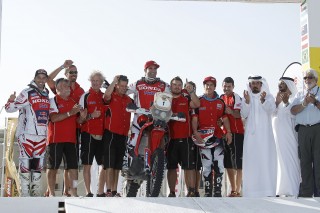 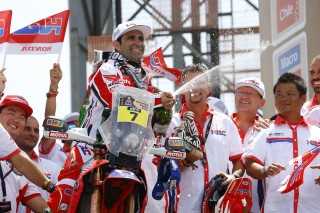 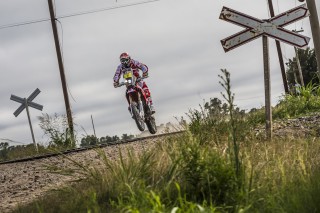 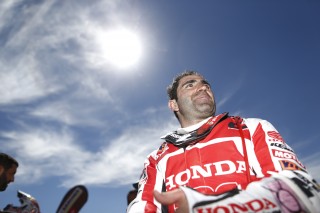 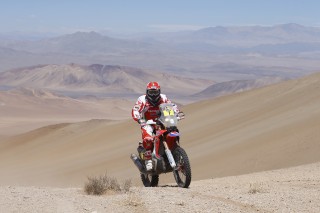 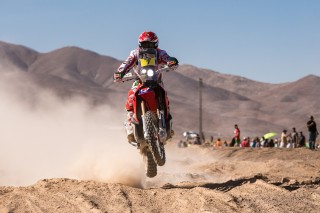 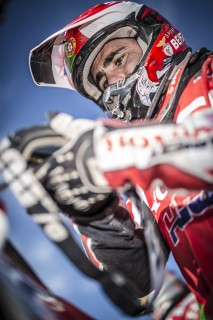 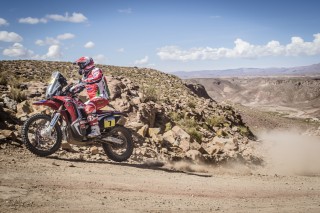 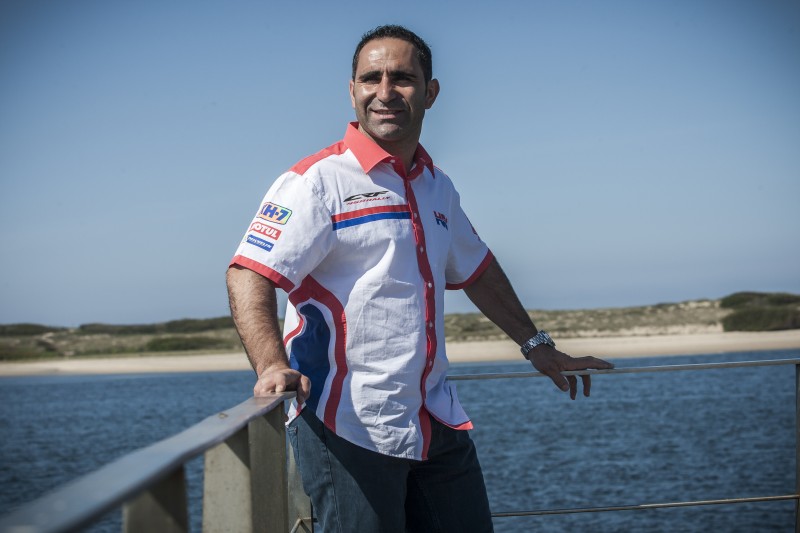