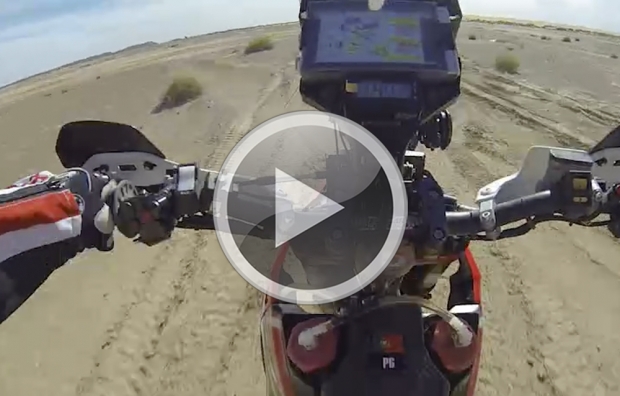 The Morocco Rally concludes – the last stepping stone in the season before Team HRC heads off to tackle the main objective. The team comes away from the final race of the season having drawn positive conclusions that could prove decisive with the Dakar Rally looming.

Three wins out of five stages, a podium finish and a world championship bronze medal reads the final balance sheet for Team HRC in Morocco. The completive races have thus concluded and in front lie two and a half months before the 2016 Dakar gets underway – a trilling countdown ahead of the world’s hardest and most exhausting race.

Paulo Gonçalves battled hard all week to keep the chance of a world championship title win alive. However, the Portuguese rider saw his hopes dashed after getting lost on the second day, although this did little to diminish the will to fight. Paulo won two stages and an unexpected final twist saw the Team HRC rider finish in third overall. The points acquired were enough to secure a bronze medal in the FIM Cross-Country Rallies World Championship.

Joan Barreda won the first stage and took back the leadership in the third stage although a heavy fall on day four put an end to any aspirations to an overall victory. The Spaniard was forced to quit the race. Barreda escaped without serious injury and will line up on full form for the Dakar.

In Morocco, Team HRC took part using the bikes and the set-ups that will feature at the Dakar, although the some last minute changes forced a change in the human element. The Morocco line up was reshuffled after Michael Metge had picked up an elbow injury, with Italian Paolo Ceci being drafted in to make up the team. Ceci, showing great team spirit, finished in the top ten.

Team HRC invited South American riders Kevin Benavides and Jean Azevedo from Honda South America Rally Team to participate. This was the third rally outing for the Argentinian, the first event outside of the Americas and also the debut in the FIM Cross-Country Rallies World Championship. The result was a fine one: a fourth place finish that will boost confidence for his Dakar debut. Azevedo had to adapt to a different bike from the one he has used in the Brazilian championship and once he had found the groove, started to produce some pacey performances.

Next, Team HRC will be attending various commitments for the official team presentation. All the riders who will be taking part in the forthcoming Dakar will be present at Milan’s EICMA and also in Paris for the ASO presentation of the 2016 edition of the Dakar Rally.

The 2015 Morocco Rally has finished. It has been a good preparation for the Dakar. I would like to thank all of those who have supported us, those who have followed our results and also everyone at Honda and Team HRC. It was a pity that Joan couldn’t finish, but luckily he didn’t get injured. We have been able to see his performance this rally and he will be back to continue to display his level in the Dakar 2016. Also, we have found very few mechanical problems this time round. This is very important for our R&D side. So now we just have to fix a few minor issues. We will have everything in perfect condition and we are looking forward to the Dakar 2016.

The Morocco Rally was a real warm up for the Dakar for everybody. Almost all the team and riders were racing here in Morocco in order to prepare themselves for the next Dakar 2016. Team HRC was present with almost the complete team except for Michael Metge that was injured few days before the race.
The level of the competition is increasing every year in rally and now the top five positions are really close and competitive. Also, this Morocco race was really hard and demanding for riders and bikes.
All in all it was good training for Team HRC. We have shown one more time to have the fastest rider on the scene winning three out of five stages, two with Goncalves and one with Barreda.
Barreda was unlucky as he received a penalty two days after he made the navigation mistake on the first special stage and it was hard for him to keep the concentration in the fourth special stage, after all the great work he did over the first three days of race. That’s why he had the crash. I am happy that he was not injured and that he can be ready 100% for the Dakar.
We had also the possibility to work closely with Honda South America team, offering them two last minute spots in the team to Kevin Benavides and Jean Azevedo.
In Morocco we also tested the final configuration for our CRF450 rally bike before the Dakar. HRC technicians have done an incredible job over the last few month and the bikes improved a lot in performance and reliability compared to the previous version.

The final round of the 2015 World Championship in Morocco was quite demanding for both team and rider. Several last minute changes gave us quite a challenge. We had our usual riders Joan Barreda and Paulo Goncalves, but in the end we had to substitute Mika Metge, so in the end the rider set-up was extended with two South American riders from Honda South America: Jean Azevedo and Kevin Benavides and we also had the pleasure to welcome Paolo Ceci as a support rider in Team HRC.
In the end we had a very interesting week. We started quite well with a first stage win for Joan Barreda, after his injury break and until day three everything seemed to be under control. Paulo Gonçalves was in reaching distance of the top and was still fighting with some other riders for victory in the world championship. Our down-day was day four when Joan Barreda had a high speed crash. Luckily he got away with out any serious injury. It was a very dangerous, fast stage and in the end we saw a lot of riders crashing which is something that we don’t want to experience much in a rally, but of course many riders are fighting on the limit and stages like that cause accidents. Also, in the final stage some riders fell but our four riders finished well and Paulo took the second stage win on day five. He earned a third overall in the rally and also a third place in the world championship. Kevin Benavides finished with a really remarkable fourth place in this high class field; it has only been the third rally that he has done in his career. We had the pleasure to have Paolo Ceci in the top ten, showing that he can be a strong support for us in the Dakar as the fifth rider. Jean Azevedo had a chance to have a rally outside of South America and prepare for the Dakar.
This is, traditionally, the last test before the Dakar. Overall we are satisfied with what we have achieved so far. In theatre they say ‘We had some problems in rehearsals, so we expect a perfect show.
Thanks to everybody in the team and Team HRC for the big help and support and congratulations to Matthias Walkner and KTM for their world championship title and victory. 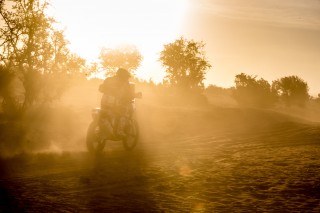 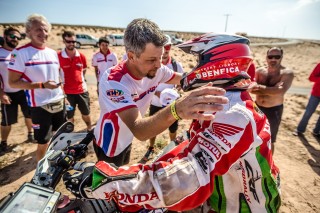 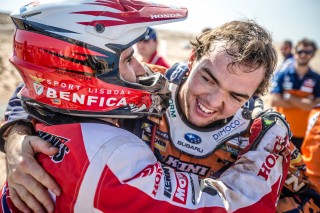 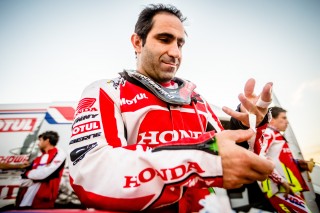 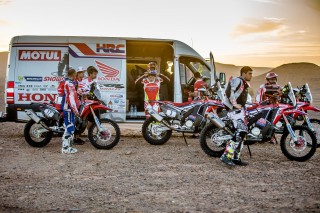 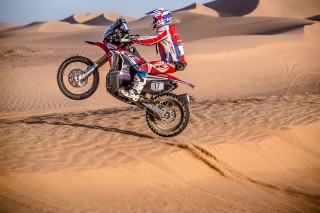 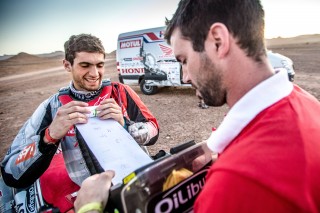 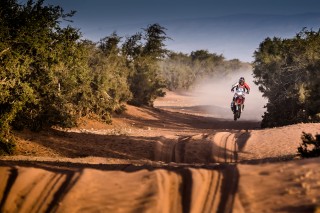 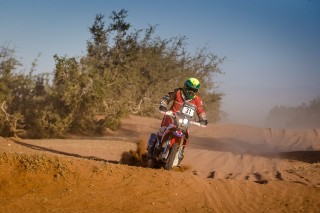 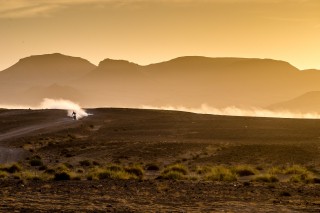 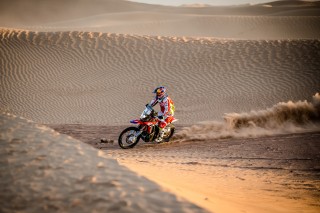 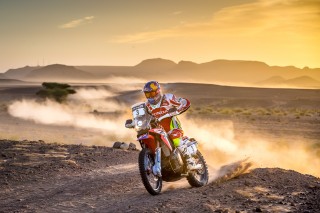 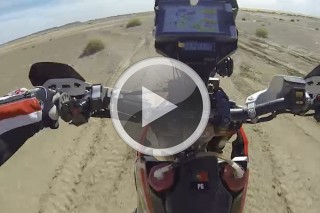 Three wins out of five stages, a podium finish and a world championship bronze medal reads the final balance sheet for Team HRC in Morocco. 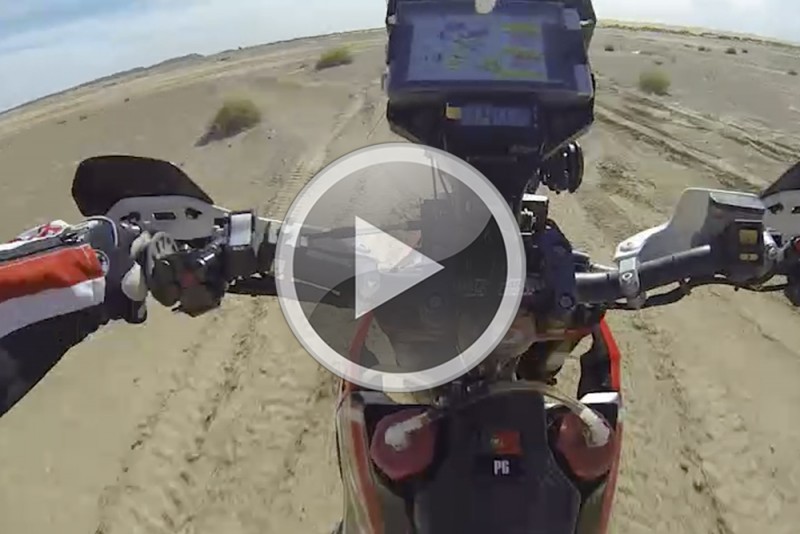