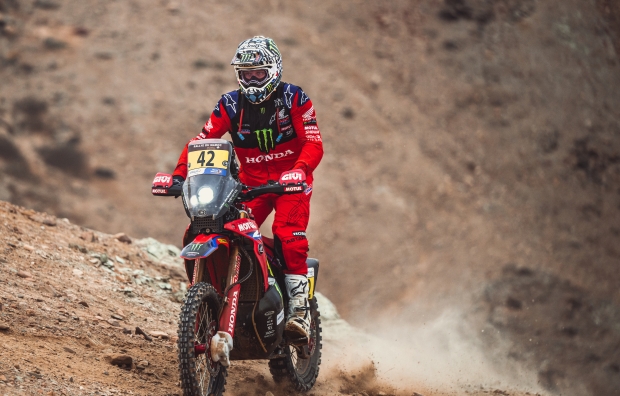 The last stage of this year’s Rallye Du Maroc brought today riders back in Agadir, leaving the desert around Tan Tan at the first morning light. It was a shorter, but not less intense, special section. Navigation was key and gave Adrian Van Beveren the privilege of another stage win! In the overall standings 2020 Dakar winner Ricky Brabec was the best of the team with a podium position.
It was an intense week for Monster Energy Honda Team back into the action of the FIM Cross-Country World Championship. After Dakar and the UAE Desert Challenge, Rallye Du Maroc was the third round of the competition. Getting back to the landscapes of the south of Morocco, the race started last Sunday in Agadir, making a trip to the desert around cities of Tan Tan and Laayoune.

The comeback to Agadir meant a total 379  kilometres  to cover, 89 km in laiason and 290 kilometres of special stage. It was time to enjoy a last sprint along the Atlantic Ocean, with sand on the way and most of all rocky and hard pistes. Just before arriving, participants got back on the beach and showed all their style along Plage Blanche.

The highlight of the day was for sure another stage victory for Adrien Van Beveren, while Pablo Quintanilla finished in 4th position, José Ignacio Cornejo in 5th and Ricky Brabec in 14th position. In the overall standings, Quintanilla is now second (52 points) and Brabec third (50 points). In the manufacturer standings Monster Energy Honda Team has seen its leadership reinforced (112 points).

The Andalucia Rally is the next and last round of the championship, so the meeting is already set for 18 to 23 of October.

“We have spent some days in Morocco and here we are again in Agadir after such an intense week. I must admit that we made some mistakes and after the prologue I could see that our goal to win or reach podium places almost vanished. But I am happy with my riders, they turned this around and make it possible! We had a podium and all four riders finished, they are happy with the bike’s performance and with their own reaction. I have to highlight that this results here in Morocco helped us to increase our manufactures championship lead. About the title of World Champion, we still have two riders in contention – it will be hard in Andalucia but it is still possible”.

“The rally was great, overall it was good for the team to get together, do some testing, read some road books. The team did a good job working together. Today it was a bit tricky for us, we had to open the stage and try not to loose a minute. It’s really tough in rally to do that, so it was difficult for us. In the end we’re happy that we are on the podium, we are happy that the team is working great together. We’re looking forward to go to Andalucia and try to improve our speed and navigation”.

“Today it was a goods stage for me, I started in 5th position and that was great to reach the front group soon. The first kilometres were not easy, but I tried to be accurate in the navigation and lost much less time than the group upfront. The feeling was good, the terrain was nice – a lot more technical - and I went really fast. This was my first race with Honda and day after day I felt more comfortable in the bike. I know I am doing all the right steps to reach the next Dakar at the highest level.”

“Personally for me this was a very hard rally right from the start, with lots of rocky tracks. I was quite limited after the first day due to a crash that affect my shoulder and put me into a lot of pain. Even with this handicap, I was able to ride in a great rhythm from start to the end. This was not the perfect rally for me, but I know I did my best and it was worth all the dedication here in Morocco. Now let’s chill and rest one week because Andalucia is just there!”.

“We are done with Rallye du Maroc 2022, it was a hard one with a lot of stones and rocks. The level was quite high among the riders, who were really competitive. I know I could have done better, but the most important is that I have learn my lesson. We still have another race to do in the world championship so now that will be the main focus, being sure that preparation for Dakar 2023 is going well”. 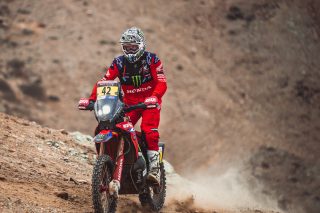