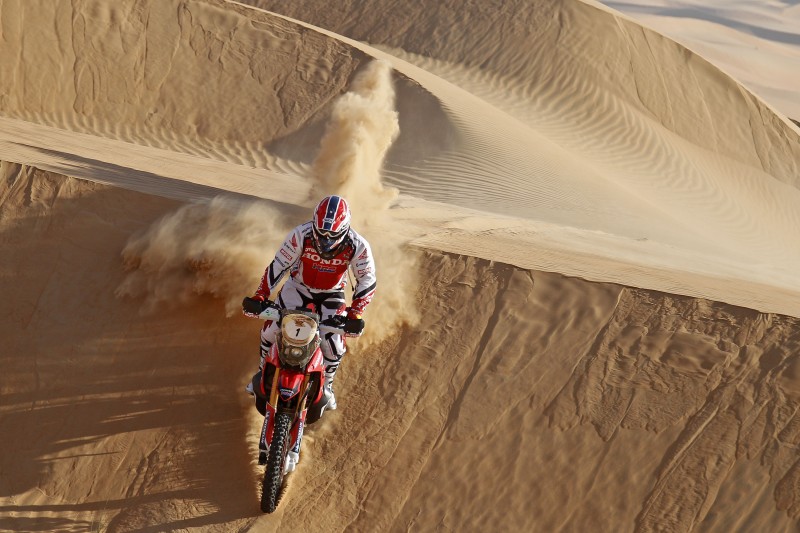 A highly productive day for Team HRC riders at the Abu Dhabi Desert Challenge, with Joan Barreda flying to victory in the third special just ahead of team-mate and reigning world champion Paulo Gonçalves.

It was a terrific win for Joan Barreda in the third stage of the Abu Dhabi Desert Challenge and a worthy second place for Paulo Gonçalves, who moves in on the front-runners. The race goes into the final days with everything left hanging in the air.

It was a very positive day for the riders of Team HRC in the third stage that took place between Moreeb and the luxurious bivouac in Qasr Al Sarab. After the 256.4 km special over the dunes of the great erg of Moreeb in the country’s south, Joan Barreda was able to floor his Honda CRF450 RALLY to reach Paulo Gonçalves and accompany him to the finish-line. In doing so, the Portugese rider closes in on the two race leaders ahead in the overall standings. Paulo now sits just 52 seconds behind the leader Sam Sunderland.

Hélder Rodrigues finished the stage comfortably without taking any excessive risks in what had proved to be a tricky stage, where high speed corresponded to high danger. Hélder was fifth some 8’51” behind Barreda.

This marks Team HRC’s first double with the new line-up so far in the 2014 season. In the last edition of the Rally Dakar, Joan Barreda and Hélder Rodrigues, again on the Honda CRF450 RALLY, had finished first and second in the tenth stage. (Iquique-Antofagasta).

Tomorrow’s stage will have a new twist: the riders will set off in groups of fifteen in a motocross-style start.

The Eurosport International TV channel will be showing the highlights of the Abu Dhabi Desert Challenge. Broadcast time is scheduled for Tuesday at 23:30 hrs.

"Today we had a really good day for Team HRC. We achieved first and second overall, me and Joan. We have two more days to race, and I will keep battling with them to try and win. We are really happy with our bike because we can really put it to the test on these hard tracks in Abu Dhabi. Everything is ok at the moment so we are really confident about what is coming in the future."

"One day more. A good day for us I think. Paulo did a good job as well as Joan. I finished today in fifth place. It was a great day. Now we’ve got to keep going for two more days. Tomorrow is motocross and then it’s the last day to decide the race. I’m happy to be here with the new team and I think everything is going really well. Congratulations to everybody."

"I’m really happy with the win for Joan Barreda who proved that he’s a really fast rider, and with the second place of Paulo Gonclaves who has been putting in a very consistent race here in Abu Dhabi. Paulo is now very close to the first riders. We are improving our bike. The team is working very well together and the bike is improving day by day. I think that we are in the perfect position to attack in the next two days. My compliments to the team and the riders for the work done so far."

"Today we had a very nice team result; first and second in the stage, which also means the first desert stage victory for the new Team HRC configuration, and we are happy to be in fighting distance of the first two riders, at less than one minute behind them. So far Paulo has been doing everything possible in the last two days. Joan made up some ground today too. Helder didn’t take too many risks as he is further back, as a result of the technical mishap on the first day, but overall all three riders are in good moods and in good attacking positions for the last two days. Tomorrow we’ll have a motocross start, meaning fifteen riders on the starting-line together – something special for the rally. We’ll see how it goes." 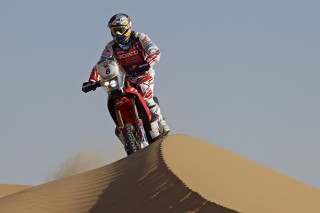 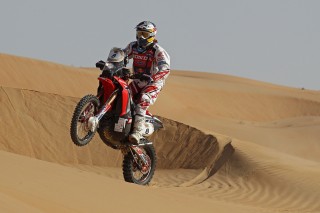 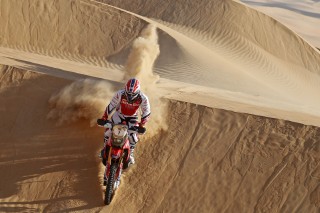 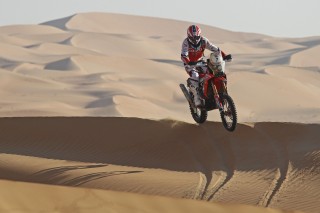 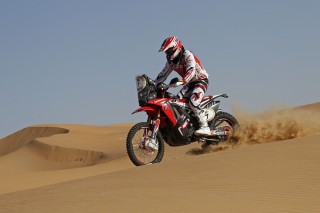 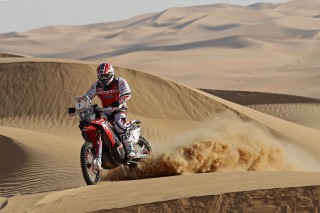