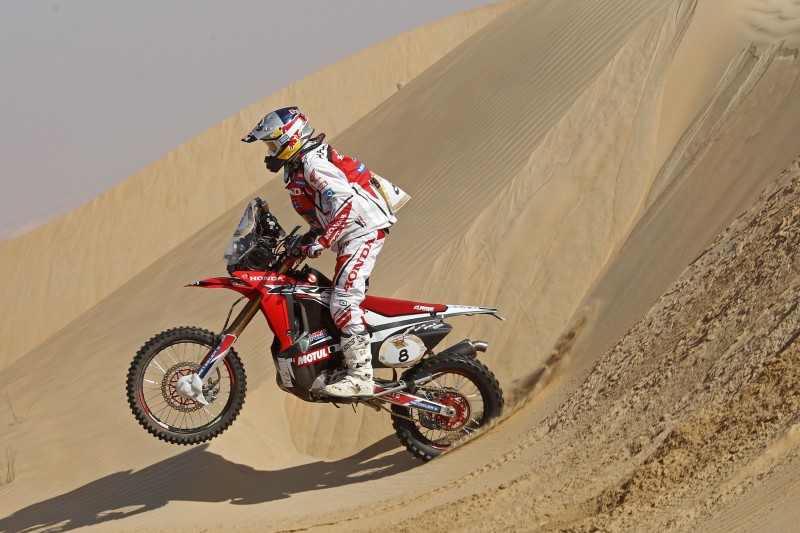 Team HRC’s Paulo Gonçalves finished the second stage of the Desert Challenge in third place and Joan Barreda likewise repeated yesterday’s fourth place. Hélder Rodrigues crossed the line in seventh after starting out from way behind.

The second stage went as planned with the three riders on the Honda CRF450 RALLYs arriving at the halfway point with no major mishaps. After days in which practically every rider had experienced tough moments, today it was all about keeping up the pace without jeopardizing rider safety. The route across the sand was not a heavily technical one although in the second special there was the constant threat of running into some hidden hazard. The second part of the course was made up of various banks of dunes requiring some navigation before drawing to a close in Qasr Al  Sarab.

Paulo Gonçalves started out in third place and was able to keep up a fine rhythm to finish once again in a podium position. Joan Barreda was forced to stop after the refuelling to check that his Honda CRF450 RALLY was running correctly and dropped a few minutes. In spite of stopping he managed to finish in fourth just behind his Honda team-mate.

Hélder Rodrigues started from 26th position after suffering a set-back that caused him to lose a lot of time. The Team HRC rider battled his way back into sixth place in the stage and tomorrow it should be back to business as usual.

The Eurosport International TV channel will be showing the highlights of the Abu Dhabi Desert Challenge. The broadcast time for today, Monday, will be at 22:55 hrs and tomorrow at 23:30 hrs.

"I’m happy with the third place. My CRF 450 RALLY worked really well in these hard conditions here in the Abu Dhabi desert. We’ve got three days ahead here and I’ll try to get ahead and catch up to the first position. It won’t be easy, but we have the right team and bike to be in the running for it. Tomorrow we will see."

"Another day over in Abu Dhabi. Today I held back. I tried to get more speed but it’s not so easy when you start from last place in the race. It’s difficult to pick up the pace of the first guys. I tried to finish the day so as to be able to start among the top riders tomorrow."

"Another hard day here in Abu Dhabi. We can see that our riders are really strong. Today was really tough for them and quite dangerous. They finished the race in a bunch with Paulo in third, a good position for tomorrow’s attack. The bike’s are holding up well and I’m very happy that they’ve all managed to finish this race, because it’s very dangerous here in Abu Dhabi."

"Another good day for the team. Paulo was able to stay close to the top riders Sam and Coma. Joan had a few minutes delay for a quick repair but nothing dramatic. Both riders used their heads and didn’t take too many risks because there are some really big jumps over the dunes and one small mistake could cause a crash or a lot of damage. Helder had a bit of a delay but caught up well. In the end all three guys are here and there are three big days to go. So let’s see what happens tomorrow." 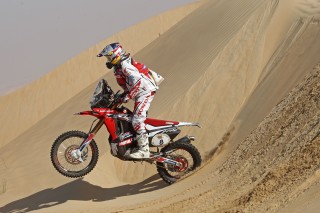 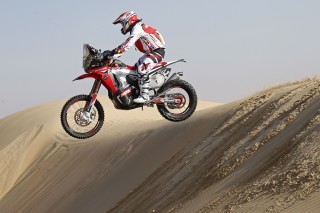 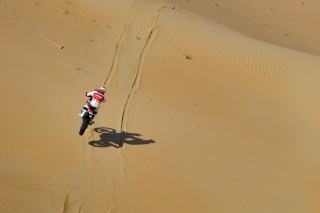 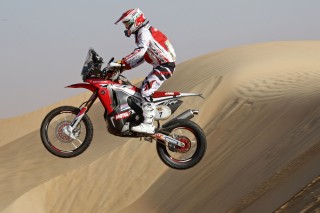 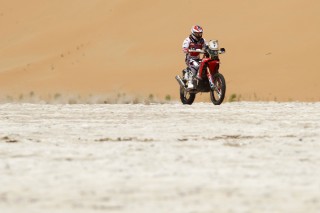 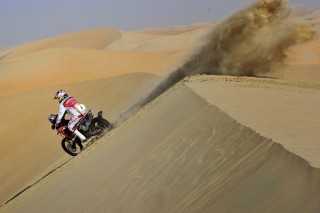