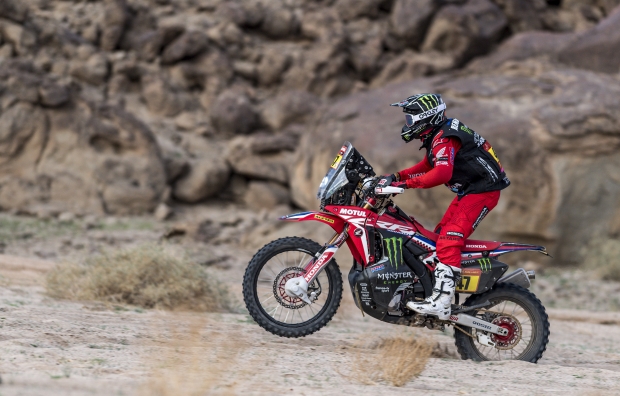 The penultimate stage of the Dakar has once again produced some upsets. This morning, three riders set off from the Al-Ula bivouac eager to gain a place on the final podium. Brabec and Benavides remain in the battle for the overall win. Barreda has been forced to withdraw.

The longest special of the Dakar, as had been expected, caused some major shake-ups in the overall rankings. The originally planned 511-kilometre special stage was trimmed down to 464 kilometres due to route modifications. Recent rains had left the pistes in extremely poor condition causing race authorities to annul the most affected sections, citing safety reasons. There was, nevertheless, some complicated navigation to deal with on a route over all kinds of terrain: hard rock-filled tracks, dunes, sand and even a downpour of rain to welcome the riders upon arrival at the new Yanbu bivouac.

Ricky Brabec and Kevin Benavides still have their options wide open for the Dakar win. Today, the Monster Energy Honda Team riders completed a full stage which leaves them in an advantageous attacking position to be able to finish this Dakar on a high note. Ricky Brabec got the day’s stage off and running, opening the track and, in spite of some setbacks, managed to keep a steady pace, which eventually saw him posting an excellent sixth place, some 7’13” behind the Dakar leader Kevin Benavides.

Argentinean Monster Energy Honda Team rider Kevin Benavides defended his overall lead in the race well to claim third place on the day. Tomorrow, he will attempt to hunt down his rivals in a bid for top honours on the final day of the Dakar Rally.

Joan Barreda’s Dakar came to an end on this penultimate stage. The Spanish made a navigational blunder which meant he was unable to stop at the refuelling point. A few kilometres later the Spaniard ran out of gas and was forced to retire. The rider then underwent medical checks to determine his condition after a fall yesterday.

The Dakar wraps up tomorrow with a final stage scheduled to finish in Jeddah, where the rally both starts and finishes in this 2021 edition. There will be just 202 kilometres of timed special, concluding on the shores of the Red Sea, but also featuring over 200 kilometres of liaison section. The winner of the Dakar 2021 will be known at the end of the 452-kilometre special stage.

The stage was really long and we are very fortunate to have ridden really well yesterday and we were very unfortunate to open today. It was the longest stage of the whole rally. It was a tough one. I rode with my team-mates. I’m happy to be here. We opened for most of the day. We have finished stage eleven. We are happy to have made it this far. Tomorrow, we are going to do our best and will try and finish tomorrow in Jeddah. The results are crazy. We are going to do our best and stay focused. Tomorrow we are going to give it 100% and ride like never before. Anything is possible. It’s 270 km tomorrow. Kevin is 8’ in front in the general but starts just 6’ ahead. So to catch him and then put two minutes on top will be really tough. At this point I’m stuck. I don’t know what to do. Tomorrow we will put the helmet on and give it all we have. It’s do or die. We have to make three minutes on Sam. It’s nice to have someone else starting. We are going to push.

Today was a long and difficult stage. It really had everything: it was very technical for navigation, we had dunes, rivers, rocks, but the truth was that it was a very beautiful stage. I was determined to enjoy it and to try not to make mistakes with the navigation. It was a long day. I started third and I was able to catch my team-mates at kilometre 100, more or less. Then Joan made a mistake and ran out of fuel and, later, I passed Ricky and started to open the track for almost 200 kilometres. Later in the dunes I was able to ride together alongside Ricky and not lose too much time there. I think we have done some very good teamwork. I'm very happy with the day and now, more than ever, we have to be focused and give it everything tomorrow, the final day of racing.

The fall two days ago really took its toll today. I really wanted to continue in the race and finish as best I could, but it wasn’t to be. I want to thank my team and all the fans for having always being there for me. 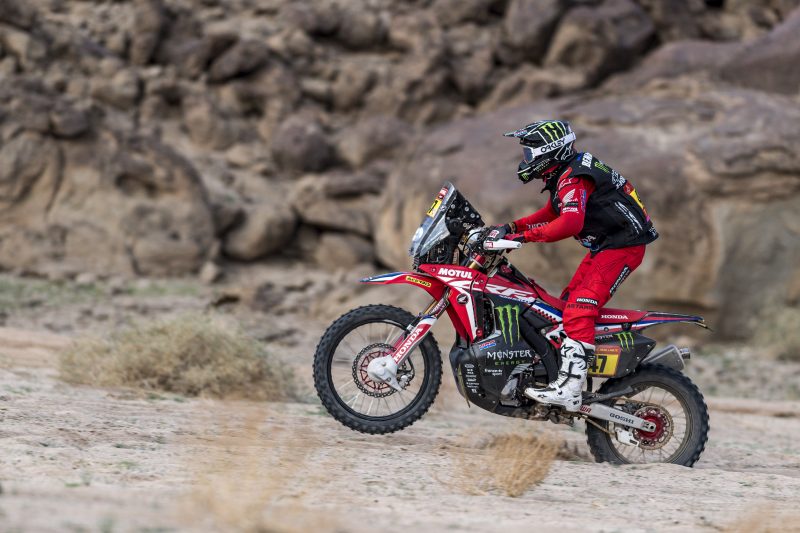