Who is Ricky Brabec?

Ricky Brabec’s life took a fairly radical twist as desert racing grew in popularity in the United States. His interest in bike racing, and particularly, desert races, increased quickly and his incredible talent led to rapid progress in riding skills too.

It has been an intense career so far for young Ricky Brabec, who enlisted for his first Dakar Rally at just 24 years of age. The American, does however, have a lengthy list of titles behind him; the youth from the U.S. had his best season to date in 2014, when he scooped the three most prestigious titles in desert racing: the Hare & Hound, Best in the Desert and Score, as well as clinching the Baja 1000, Baja 500 and the Baja 250. Such an impressive honours list didn’t go unnoticed to Team HRC who scouted the youth before inviting him to take part in the Abu Dhabi Desert Challenge in early 2015 – his first international participation – where he was the top Junior and fifth overall. After an injury, he returned to the Hare & Hound, winning the last race.

The big American’s apprenticeship came on in leaps and bounds in his debut at the most recent Dakar, as the rider continued to adjust from the kind of racing that he was used to in North America. A ninth overall position places Brabec firmly among the leading figures in the arduous Dakar Rally.

RICKY TALKS ABOUT THE DAKAR RALLY

My favorite moment of the Dakar rally is…
finishing, as I have only done one Dakar Rally until now. It’s a brutal race over fourteen days and I had never done anything like that before.

My worst souvenir of the Dakar has been…
the weather. It’s temperamental – one day you have hot weather and the next day it’s freezing cold – so I think that’s hard. It’s never fun riding a motorcycle in the freezing cold. Other than that, my ride was good and I hope to better my results. It’s a bit frustrating and annoying when you can’t win.

What is your goal for the Dakar 2017?
The biggest challenge for me is just trying to improve on my ninth place from last year. I was just getting a feel for the race and seeing what I was able to do. This time, in 2017, we have a very solid team and all of us can push towards the front. 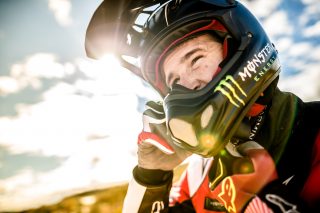