Honda continued the tendency once more today in the longest stage of the Rally OiLibya of Morocco. The race concluded in Zagora with a third consecutive win for the CRF450 RALLY. Joan Barreda was once again the fastest, and Paulo Goncalves takes over the overall leadership.

At the end of a long gruelling day in Zagora, Joan ‘Bang Bang’ Barreda was once again the fastest in the 2014 edition of the OiLibya Rally of Morocco. The Spanish rider was heavily penalized yesterday for excess speed, with a thirty minutes penalty that saw his triumph annulled and passed down to yesterday’s runner-up, his fellow Honda team-mate, Jeremias Israel. Today Barreda got off to a storming start, yet again proving himself to be the fastest on the track, leaving another HRC rider, Paulo Goncalves two and a half minutes behind. Honda and the CRF450 RALLY thus clinch the third double in three days.

Portuguese Goncalves, managed to keep up a cracking pace throughout the stage, fighting a splendid comeback that sees him move up to the top of the overall leader-board, with a forty second advantage over Marc Coma. In seventh place on the day, was Chilean Jeremias Israel, who yesterday won his first stage victory in a World Cross-Country Rallies competition, thanks to Barreda’s penalty.

Helder Rodrigues fought hard to maintain the pace, in the stage that ran from Erfoud to Zagora, with 313 km against the clock. The Portuguese Team HRC rider finished in the top ten, and hangs on to his overall third place in spite of dropping time in the overall standings. Laia Sanz, finished the stage without a fall, and with no more inconveniences than the heavily potholed track in the special. She performed better over the more technical parts of the course, with the frequent changes of route, which demand more attention at the navigation – one of her strong points.

Many sand at the program of this 4th stage. At the depature of the special, the competitors can guess the Algerian border. They will then go in the Oued Draa and join the west of the Erg Chegaga. Prepare the plates and carefully follow your caps to cross 30kms on the erg. Many will be lost on differents parallels tracks to reach the finish.

"There was a very fast liasion between Erfoud and Zagora, with a lot of rutted ground, where we had to really push. It was very tough. Yesterday, I finished the stage totally convinced of having done a good job. In the end we found something that we haven't seen in 30 years of rallying with a penalty like that. We'll just have to wait and see what happens, and if the rule applies to everyone."

"It was a long and hard stage with a lot of tricky navigation. Some dunes and rocks. But I pushed hard and closed down on Marc, and now I'm leader in the overall standings. I'm happy for me and for Team HRC. We'll try and get another good result tomorrow."

"A very long physical stage with those long plains that you never know when they'll finish. It was nice. It was my turn to open the way and when I came to a place and had doubts, Marc caught up with me. Sam and Marc are battling it out in the overall, and I let Marc go. After the penalty on the first day of I haven't got much chance overall. I'm happy that it was problem free."

"It was a long and hard stage with a lot of hard navigation. In the end I made it without any problems, without breaking anything. The important thing is to be in the running for a podium place."

"Today went well - better than expected. I lost a bit of time because there were so many holes that it was impossible to pick up speed. But the important thing is to finish the stage and gain experience, get a few kilometres under my belt. It's going well."

"Day three in Morocco which ended with another double victory for Team HRC. Paulo Goncalves pushed hard to make up the time, and in the end finished as overall leader ahead of Marc Coma. Joan Barreda started from the rear after suffering a penalisation yesterday, but he was once again able to show his amazing speed and win the stage. The other riders arrived without problems too. So, a very good day, and we will have an interesting stage too with a lot of sand, so we'll be able to see how the bike performs under these conditions." 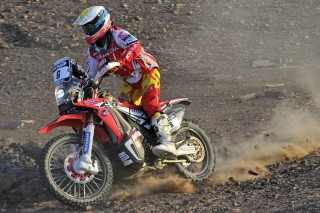 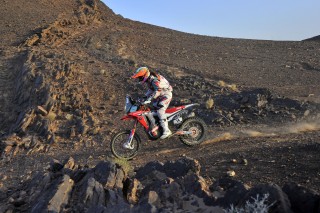 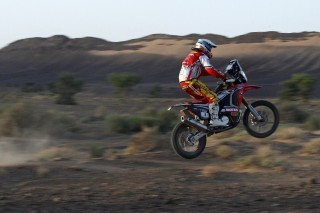 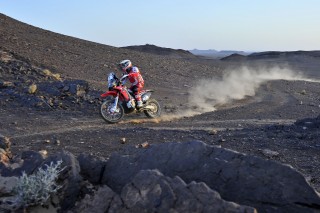 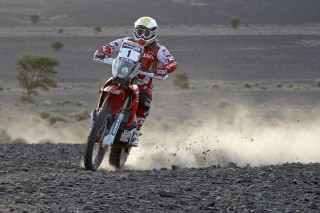 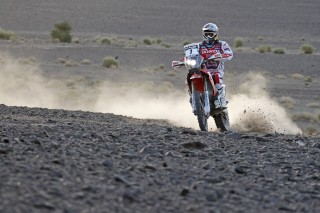