Monster Energy Honda Team’s Kevin Benavides produced an excellent showing to take third place on the overall leader board – a minute and a half adrift of the leader – after the first leg of the Super Marathon stage held today between Al Wajh and Neom. All the riders now lie in the overall top ten.

The second stage of the 2020 Dakar Rally proved to be a positive one for the Monster Energy Honda Team, which places all four factory riders in the top ten of the general rankings. Kevin Benavides currently holds the third step of the overall podium.

It was a high-speed affair today in spite of the fact that – for the first time in Dakar history – riders were issued with the roadbooks just minutes prior to the start of the stage. Fast track, rock-filled winding canyons and dry river beds were in store. Most of the trajectory was flat but the multiple parallel tracks demanded particularly tough navigation from all the riders, frontrunners and followers alike.

Kevin Benavides stood out today in the special and replicated yesterday’s fourth final place to move up into third overall position in the rally, some ninety seconds behind the leader.

Another fast-paced rider was Joan Barreda, who might have even won the stage had it not been for a minor fall when he was looking the roadbook notes. The Spaniard finished sixth on the day and eighth overall in the rally. Behind him lies José Ignacio Cornejo who also turned out a fine showing. The Chilean, seventh today, climbs one place on the overall leader board and now holds tenth place. American team-mate Ricky Brabec, also managed the situation skilfully and, in spite of having to start the day from second position, was able to post eleventh final place which leaves the rider in fifth position overall some four minutes shy of the overall leader.

Aaron Maré, after injuring a hand in a heavy fall on stony ground yesterday, this morning underwent observations to discern the extent of the injury and it was decided by both the team and the rider alike, that due to injury it would be better not to not take the start-line.

Tomorrow sees the final leg of the Super Marathon on a looping 489-kilometre course in Neom, including 404 kilometres against the clock. Riders can look forward to varied terrain types and the highest altitude to be encountered during the rally.

The circuit from the future megacity of Neom is a real gem. Taking competitors to the border with Jordan, the rally offers a series of canyons and mountains to explore on a carpet of sand. During this special stage, the Dakar will reach its highest point, at an altitude of 1,400 metres.

Today was a very good stage for me, even better than yesterday’s. I started in fourth position and at kilometre 140 I reached the other riders in front and I went out in front and opened the track. For me there were good feelings, I navigated fairly easily for quite some time. Ricky finally overtook me but I think I did a very good job finishing in fourth position. Above all today we were able to take care of the motorcycle that was something important and it is in perfect shape for tomorrow's stage.

The day was good. We knew coming into it that we were going to lose a bit of time. We started up front. It wasn’t too tricky. Up front you have a lot more focus. I lost the way a bit about kilometre 50. We all grouped up and tried to be smart and manage our motorcycles. We have the Super Marathon tonight. It’s not key to wreck your motorcycle as you have no mechanics and no assistance. I’m looking forward to day three. The team’s good and all the bikes are in one piece. We’ll keep pushing. The bikes are really good. Motorcycles don’t really carry any tools or parts, so the only thing we can do is either adjust the lever or zip-tie some things together. Other than that even if you wreck the motorcycles, you have to deal with it. We are very fortunate that all the riders have nice motorcycles for day three. So that’s a plus for Honda.

Today it went well during the first part of the stage; I had a good pace and was close to Quintanilla. Around kilometre 200 I fell while looking at the roadbook. I hit a rock and fell, not very hard, but enough to distract me a little. Right after, in the canyon area, I took a mistaken track and got a bit lost, but I was quickly been able to recover from it. In the end I was able to manage the stage quite well as today is the Super Marathon stage and I did not want to push too hard. Luckily the bike is perfect so we'll see how it goes tomorrow.

Today was a good day. We were able to finish the first part of the marathon stage without any falls and managed to look after the tyres. I was a long way behind the dust of a riders who started out in front of me and I preferred to hold back and let them open the track. Sure, I lost a little time there, but in general the stage went well. We are close and are advancing in general standings, so I am very happy about that. 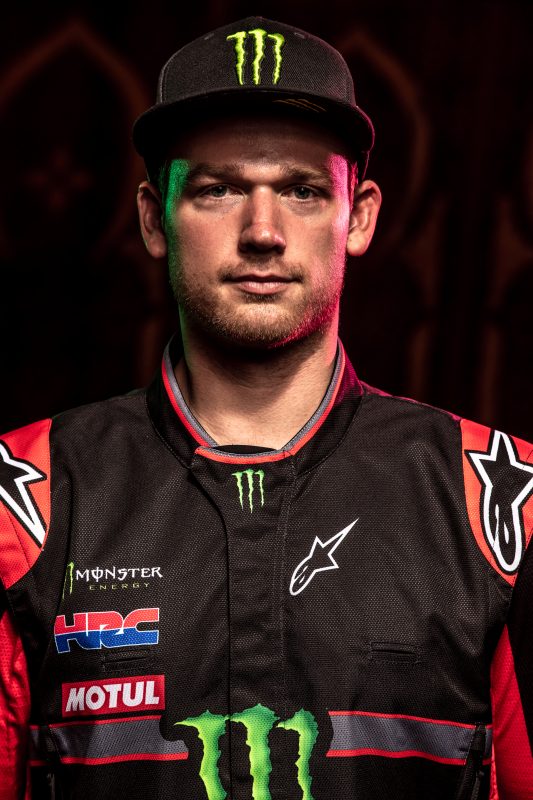 We tried to get the wrist good last night. I did a lot of work with the physio to try and get the swelling down so I could go out today. Unfortunately, when I woke up this morning the swelling and the movement was really not good and I could barely hold on. We decided it would be best not to race. It’s very disappointing for me to go out after one day. It was a tough day yesterday to make it to the end yesterday. In the end I’m super grateful to the Monster Energy Honda Team for the opportunity to come and race for them. I really disappointed to not make it to the end. My goal was to finish the race. All we can do now is recover and get the wrist sorted and come back stronger and hopefully we will be at the next one. I feel disappointed that we couldn’t make it to the end. The bone is out place of place still. It was tough to ride. I ducktaped my hand to give it more stability. In the end it was a tough day. 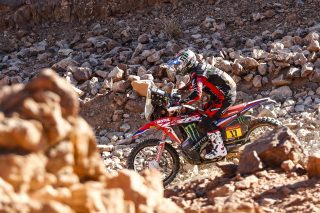 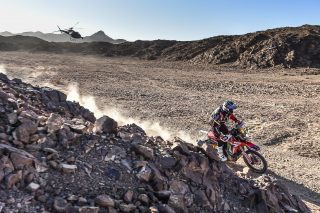 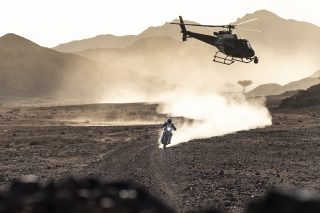 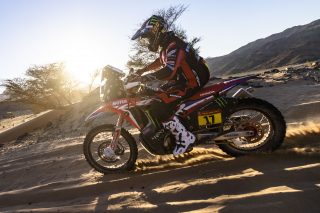 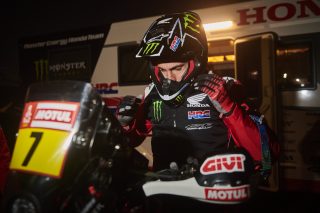 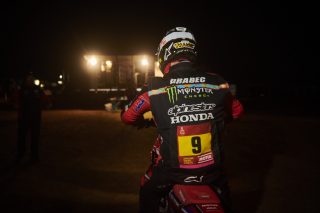 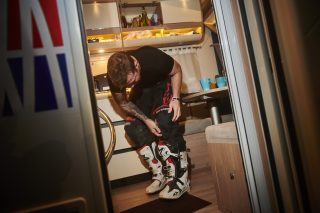