Paulo Gonçalves has won the Abu Dhabi Desert Challenge, the first race in the FIM Cross-Country Rallies World Championship after winning the fifth and final stage of the race. Joan Barreda finished third and Hélder Rodrigues was fourth on the final day.

In what was a great all-round team effort as Team HRC starts the Rally Raid World Championships with an important victory combining a solid base, consistent work and faith in the final goal. Paulo Gonçalves  rode his Honda CRF450 RALLY to perfection on the final day catching up with Marc Coma, at the second check-point, who was up alongside Joan Barreda opening the way in the special. From then on the Portuguese rider took control of the race and charged home, opening up a wide enough gap over his adversary to win both the stage and the overall triumph in the Abu Dhabi Desert Challenge.

Joan Barreda finished the stage in third, consolidating his third place in the overall standings. The Spanish rider won three of the rally’s specials. Portuguese team-mate Hélder Rodrigues finished fourth in the stage and seventh overall.

For both Gonçalves and Honda and HRC, this is the first win in the Abu Dhabi Desert Challenge. Paulo Gonçalves made an impeccable start to his world title defense, becoming the first leader of the FIM Cross-Country Rallies World Championship in 2014.

Next race: Sealine Cross-Country Rally (Qatar), from 20 to 25 April

The Eurosport International TV channel will be showing the highlights of the Abu Dhabi Desert Challenge. Broadcast time for today is scheduled for 00,30hrs tomorrow morning.

"So this Abu Dhabi rally is finished, and I’m really happy for me, and all the team. We have fought a lot during these five days, but we have shown that we have a strong team, a really competitive bike, some really fast riders, and we managed to pick up a victory. So we should be pleased and confident about our future. Our bike is working really well in these hard conditions here in the Abu Dhabi desert, so we need to be happy. Congratulations to everybody."

"Good. So finally I am really happy for the victory here with Paulo in the first race of the world championship, and in the end I’m also on the podium. We did a really good job on the last day and we had a win in the first race for Honda."

"The first race in the world championship with a win. I think it’s a very good start for everybody. Paulo did a really good job winning the race. Joan also put in a very good race. I did my best, but after the problem on the first day it was impossible for me to do any better. In the end I think that everybody is happy. The team won the race and that’s very important for the start of the season."

"It was a very good race for Team HRC. It was very important to win here in Abu Dhabi. After the first two days of warm-up for the team, we won the last three stages with Paulo Goncalves winning the final race. Barreda won three days. It was a very demanding race for everybody but we showed great team-work here and everything worked perfectly. The machine is very fast, the team is fast and professional and they did a very good job together in order to succeed, in this, the first race of the world championship rally. We look forward to Qatar in one week’s time from now."

"Today was a great, spectacular day for Team HRC winning the first round of the world championship here in Abu Dhabi. With the new configuration of the team, this is a very satisfying result for everybody. We’ve been working very closely as a team to achieve this goal right away in the first race. Paulo and Joan did a very good job together, making it happen with great team-work. They were able to catch Marc after KTM led the whole race, so it was great to make the victory ours. It’s also a very long winning streak broken – Marc winning seven years in a row and KTM winning twelve years in a row, and now for the first time with the new Honda winning the race is a very nice achievement. Congratulations to everyone in the team." 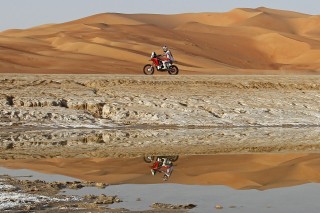 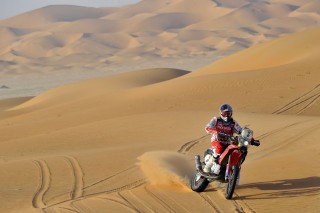 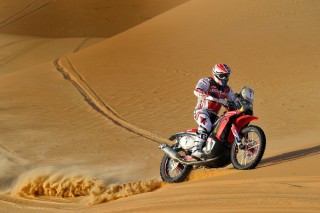 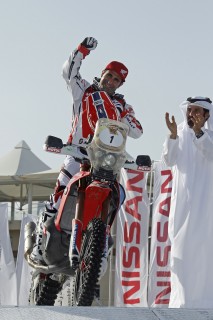 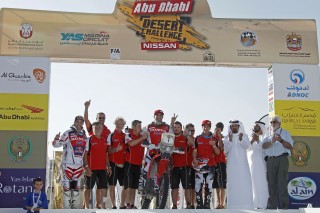 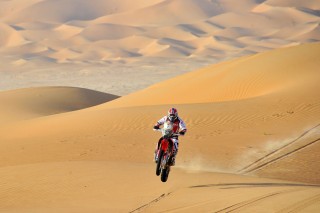