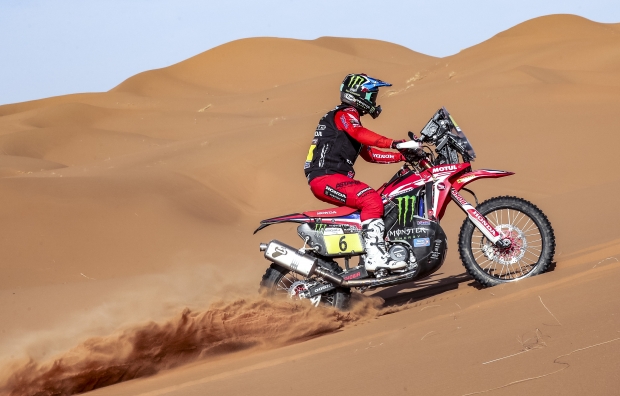 A fine result for Monster Energy Honda Team in the longest stage of the Rallye du Maroc. After today’s 600-kilometre-plus stage, the team remains in the battle for the leadership with a more than satisfactory all-round result.

The playing field for the second stage, the lengthiest of the Rallye du Maroc, was the Erg Chebbi with its majestic dunes, some of them as high as 150 metres. To reach the area, riders had to face an early morning 210-kilometre liaison section. The plains, dry river beds – oueds – and several tracks well-peppered with rocks were to play a decisive role, with the roadbook often registering off-piste routes needing some deft navigation skills. By the arrival at the Zagora bivouac, the riders’ odometers were signalling 610 kilometres. The heat was another of the condiments on today’s varied menu.

José Ignacio ‘Nacho’ Cornejo produced a fine showing today, starting from seventh position. The rider from Iquique was in the battle for the win in the special stage, although eventually dropping a minute to the race leader. Nevertheless, the rider moves up the overall Rallye du Maroc standings and now lies in sixth place, less than six minutes shy of the leader.

Nacho’s fellow-countryman Pablo Quintanilla, third on the start-line, managed the stage successfully, crossing the line in third place, 2’50 behind the winner of the stage, but the Chilean from Viña del Mar moves up one position in the general standings to just 19 seconds behind the leader.

Joan Barreda set off first today after winning yesterday’s stage. The Monster Energy Honda Team rider opened the way throughout the entire day, even when team-mate Ricky Brabec pulled alongside the Spaniard. In spite of some initial hesitation, the pair managed to set an imposing pace at the head of the field, offsetting the handicap of having to face a brand new route. The immediate rivals, who started from positions further back, with the advantage of being able to monitor the navigational moves of the Honda CRF450 RALLY riders ahead, were faced with a tough task. Brabec now holds third overall and Barreda fourth in the battle for the Rallye du Maroc.

Tomorrow looks set to be another day with a reshuffle at the head of the rally leaderboard. Once again, the action will take place at the north-east of Zagora, so dunes and plenty of navigation will once again be a constant feature on the 341-kilometre special stage. The day’s total mileage will exceed 600 kilometres.

The team is doing a good job. Stage two was one of the longer stages. Joan opened the track for 98% of the day and I was there trailing him all day. He would make a slight mistake and I would be there to help him, then he would take over the opening role again. He did a really good job today. Then a little bit before refuelling Pablo caught up with us and from there we rode together as a team. It worked really well. With the first two days in the books, we are looking pretty good and now we’ve got three days left, so let’s keep the focus.

Today was a much better day for me. I started from a good position, I wanted to ride a solid stage, without any mistakes and I think I didn't make any errors with the navigation. It was a very full stage where I was able to set a good pace. At the end there was a complicated area of navigation and I preferred to play it safe so as not to make any mistakes. Maybe I lost a few seconds, but I'm still satisfied. On the bike, I'm feeling very comfortable and I'm getting better as the days go by.

This second stage of the rally was very long and very tough. A liaison of 200 kilometres very early in the morning and the special stage of about 350 kilometres with fast, parallel tracks, stones, dunes and dry river beds. It was a high-speed special stage. I knew I was going to drop some time starting third, but in the end it went better than expected and I finished third. I'm happy, I'm second now. I feel comfortable with the bike and I'm very motivated for what lies ahead.

I'm pleased. We were able to keep a high pace throughout the whole stage. There is a lot of navigation and there are always some places where there are doubts. The riders behind were able to follow the tracks and it was easier for them. I started opening the way and I got to the end still there. Tomorrow we'll try to push hard and be careful not to make any mistakes. We are happy with how this rally is going.

The riders have done a good job today. We have to congratulate Joan because he opened for more than 300 kilometres by himself and I'm sure he is exhausted by it. We knew we were going to lose time today, especially with Joan and Ricky, who started first and second. I didn't expect Pablo to do so well starting third. Nacho had a very good special: instead of losing time he made up time on the tracks; he performed an incredible stage. We are second in the general standings, but tomorrow it's up to the others to open the way. We'll see what kind of pace they can set at the opening. It's only the second stage, but everyone has arrived safely and the bikes are in perfect condition, so for the moment, everything is fine. 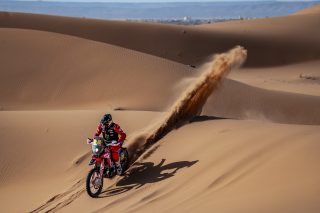 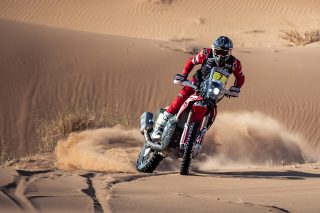 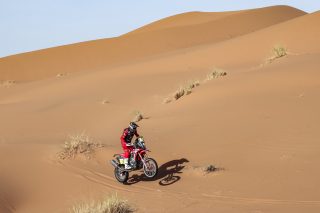 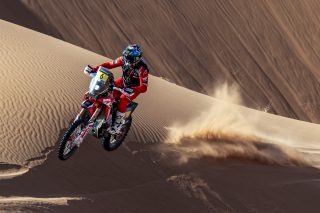 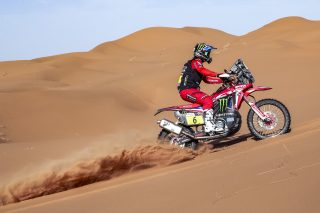 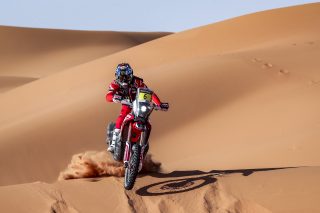 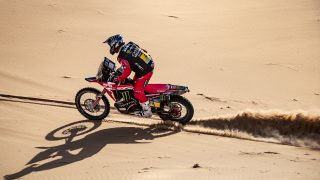 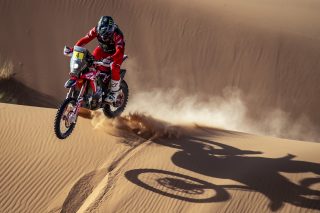 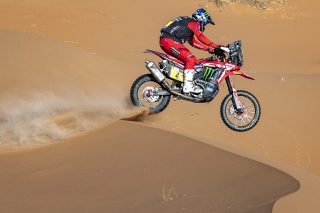 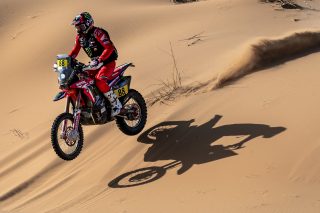 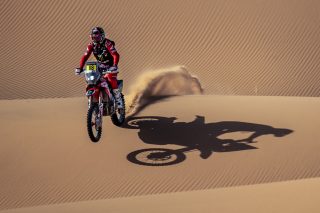 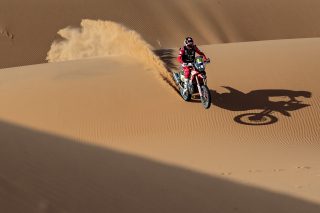 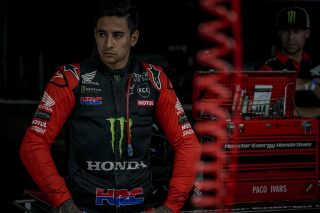 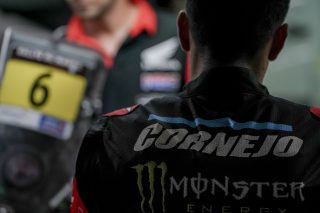 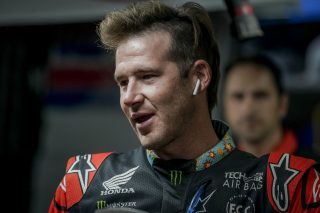 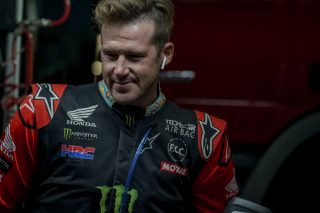 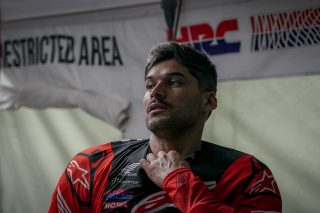 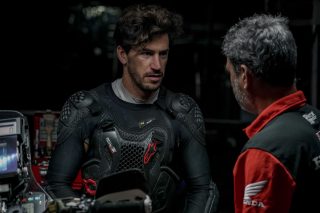 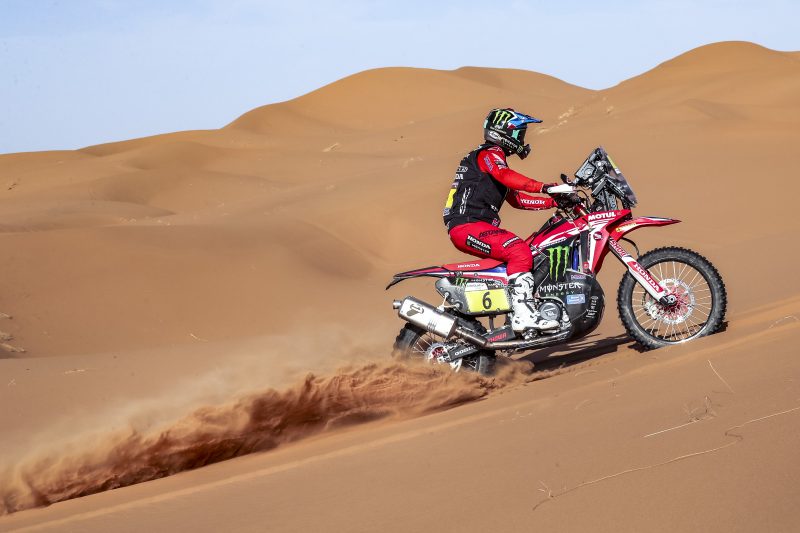