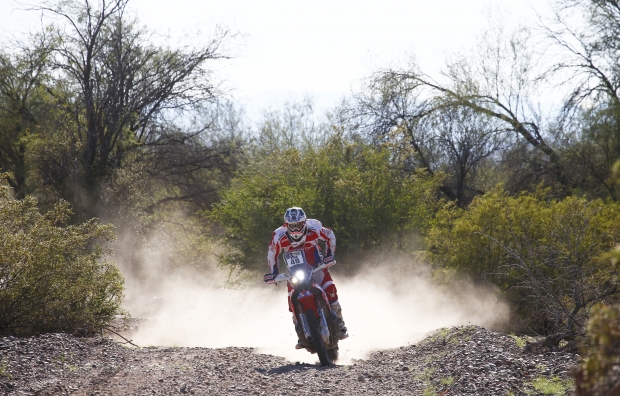 A relatively quiet day for the Team HRC riders as the Dakar 2016 enters the final stretch. Three out of the four factory riders from Team HRC and Honda South America Rally Team are young Dakar rookies chasing down top ten finishes.

Ricky Brabec and Paolo Ceci, the Team HRC riders still in the Dakar, along with the Honda South America Rally Team, Kevin Benavides and Adrien Metge, today fought out an arduous and lengthy 931 kilometre penultimate stage without taking any excessive risks in a stage that finished in Villa Carlos Paz. This should stand them in good stead to reach the final destination in Rosario tomorrow as the Rally Dakar 2016 draws to a close.

Ricky Brabec, currently ninth in the overall standings and Paolo Ceci completed a fast 481 kilometre timed section from San Juan to Villa Carlos Paz, without attacking, in the knowledge that just 180 kilometres remain to the final finish-line. Brabec crossed the line thirty minutes behind the stage winner, with Paolo Ceci posting a 16th place, his best to date in this Dakar.

This year’s surprise Kevin Benavides, from Honda South America Rally Team, continues to shine on his Dakar debut. Today he took a well-deserved third position and consolidated his excellent fourth overall. This could give him the highest newcomers’ spot in the Dakar 2016. Frenchman Adrien Metge wound up the special stage in 15th place and holds 11th in the general standings.

Stress heads and the rest
Aspiring winners will certainly be those who find the 180km of the day’s special section the most difficult, designed with twisty, undulating routes, faster sandy and rocky sections… leading to significant levels of stress. For most of the others, the 699km to be covered before reaching the podium in Rosario will be a relief. To be enjoyed without moderation…

You can see the details of the thirteen stage (route and profile), here.

Today was definitely fast and long – our liaison was over 400 km which is hard on the body and hard on the head and you don’t get a lot of sleep because you are up so early in the morning. But other than that, the stage was good. You know that we hit a lot of rain and it was cold up top in the mountains and really slippery. I don’t know if the trucks are going to be able to go up there. For the bike it was pretty dangerous and scary. Today was good and I’m happy to finish and I’m happy to get on to the final day. Today I felt good, I was sore yesterday when I woke up feeling good and happy. I was riding really well and I felt comfortable. My mistake was that I did a full doughnut on the dirt-bike and dropped the bike because it was full of fuel and pretty heavy and that resulted in bent handlebars, which I was annoyed about, but I’m glad to be here.

It was a really long day. We left very early this morning. The special was very nice but as always I was faced with a lot of riders who kicked up a lot of dirt. Mountains, rivers and some mud… it had a bit of everything and I liked that. I’m very happy with the result but I think I spent too long trying to get past slower riders in the first part.

Today was a very long stage; the longest day of the rally. A dangerous stage in the mountains with a lot of rocks. It went well, I tried to maintain a good pace and make it through to the end without any snags. I’m satisfied with it and there is just tomorrow left to finish, but we will have to pay attention because I’m sure that it will be far from easy.

After two day of pretty much disaster for team HRC with Mika Metge dropping out in the marathon stage, after his engine couldn’t be fixed and then the day after losing Paulo Goncalves, in contention for a top result, due to a crash. The only positive thing that can be said about these two days is that Paulo didn’t get a serious injury and is well. Today, the penultimate stage was a very long stage and we are very happy that Paolo Ceci and Ricky did a good job in arriving here. It was a tricky stage with a lot of difficulties to face. Now, we will collect ourselves and we are looking forward to the finish tomorrow. 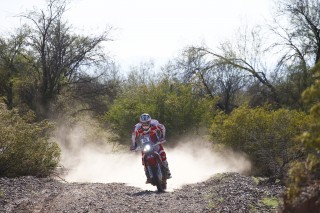 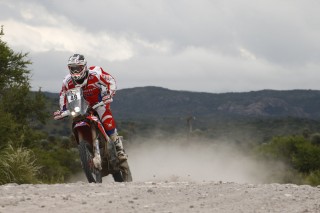 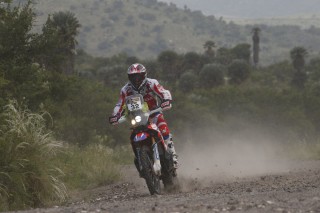 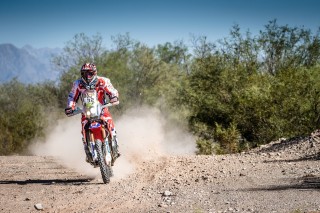 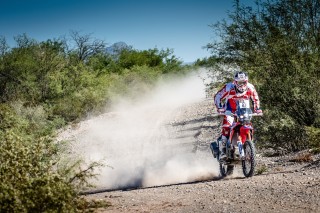 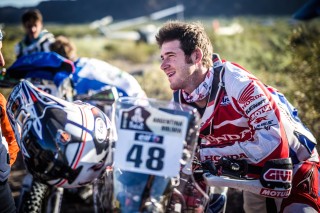 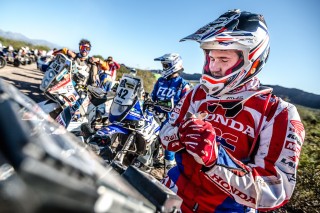 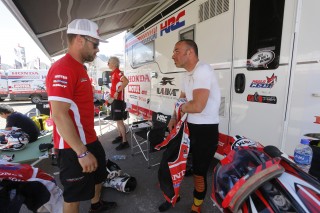 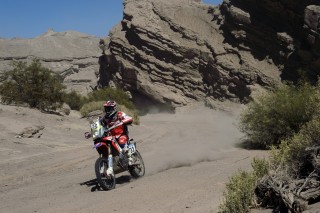 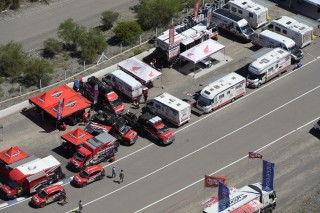 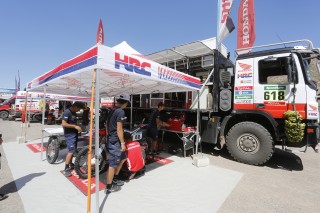 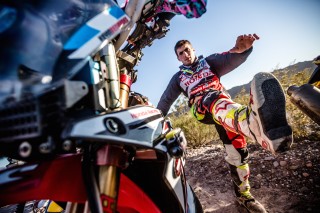 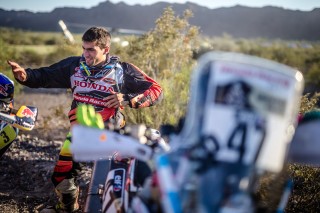 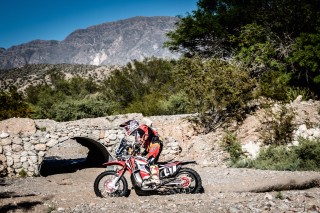 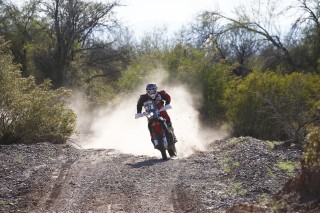 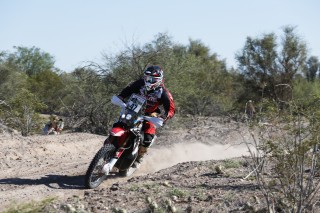 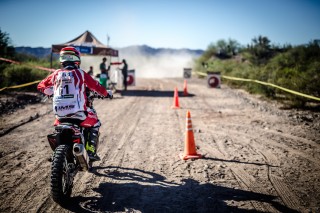 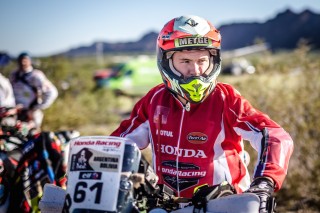 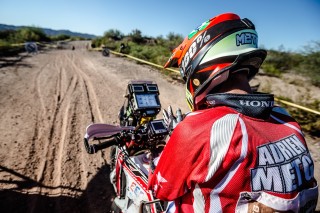 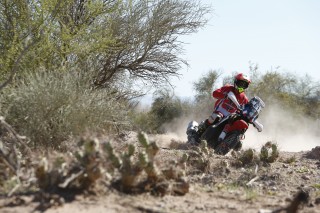 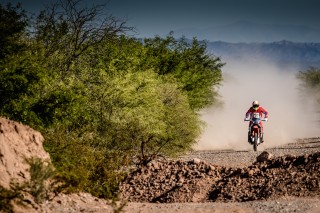 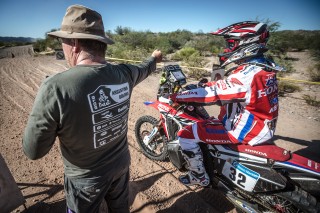 A relatively quiet day for the Team HRC riders as the Dakar 2016 enters the final stretch. Three out of the four factory riders from Team HRC and Honda South America Rally Team are young Dakar rookies chasing down top ten finishes.

Paulo Gonçalves was forced to retire from the stage between La Rioja and San Juan today after a serious crash that led to the rider being airlifted to safety. The hopes of Team HRC, now without its top riders, rest in the hands of Dakar debutante Ricky Brabec, Paolo Ceci and the Honda South America Rally Team, who the team are supporting. 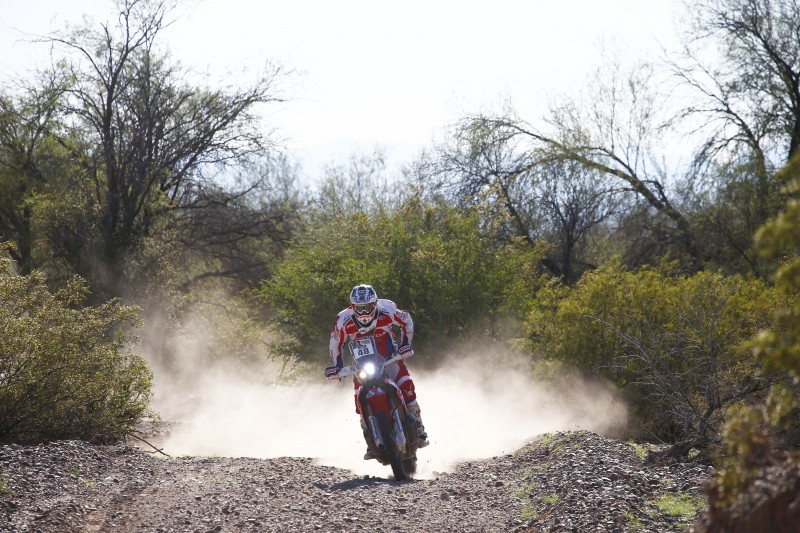