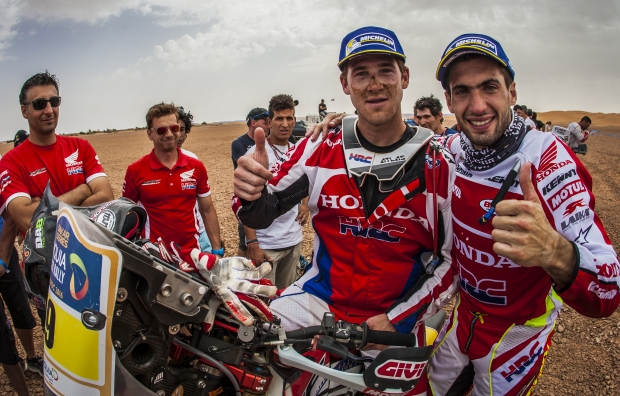 Team HRC Rally will now take stock of last week’s participation in the Afriquia Merzouga Rally. For the revamped team it was far more that just a victory: it was a display of fine teamwork, sound choice of riders and clear evidence that the team’s new work ethos is functioning.

The Afriquia Merzouga Rally put over 120 riders and teams through their paces. The race – the first of the Dakar Series – featured an even tougher course with a higher level of difficulty.

Team HRC grabbed the glory with super-charged Argentinean prodigy Kevin Benavides. Kevin first snatched victory in the prologue and after won the crucial third stage. In the fourth and penultimate stage, Benavides displayed a fine blend of concentration and riding skill, opening the track and staying ahead of the pack until the chequered flag. In the final stage – the Gran Prix des Dunes – the Team HRC rider kept his adversaries carefully in check to seal the final overall rally triumph.

Kevin Benavides’ Team HRC comrade, American Ricky Brabec, got a full-immersion course in navigation at the Afriquia Merzouga Rally. On the Honda CRF450 RALLY, he was able to experience cross-country rally navigation at its harshest. In spite of all, the American proved himself to be very quick and an overall sixth place verified this. Brabec has been able to finish all the races disputed so far in Team HRC livery.

Next week from 2nd June sees the Sardegna Rally Race, the third race in the FIM Cross-Country Rallies Championship. Team HRC will take part with Kevin Benavides, who will be supported by the Italian structure RS Moto Honda Rally Team.

It was a great rally this time. Kevin has shown a fine performance and also Ricky showed he is very fast. We have only just begun with this rally and we will now continue to build a great team and a better bike. In addition to trying out the bike during these races, we also have other tests planned to continue its evolution. The Honda CRF450 RALLY has had no problems whatsoever in this race. That is a great point in our favour because the Merzouga is a really tough, very demanding rally for the bike and the Honda responded really well. I’m very pleased about that. At the same time we will continue with our aim of getting to the Dakar 2017 with the best bike possible.

We are very satisfied with this victory. This has been our first outing with the new structure and the new team. It went really well and I want to thank the whole team, the new Team Manager, Roberto Boasso and most of all Kevin Benavides who has done a great job. In spite of a five-minute penalty he was able to overcome the difficulty and win the race comfortably. There is a lot of work still to be done and the next race will be the Sardegna Rally with Kevin and after that the Desafío Ruta 40, which will mean a continuous non-stop in the run-up to the Dakar 2017. Thanks to all and ‘Keep it up HRC Rally team!’ 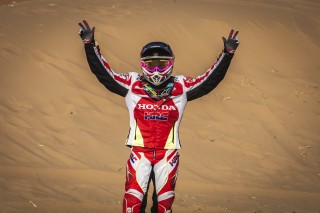 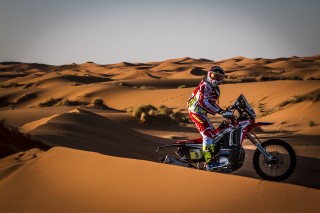 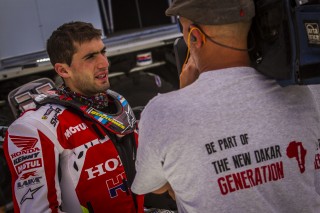 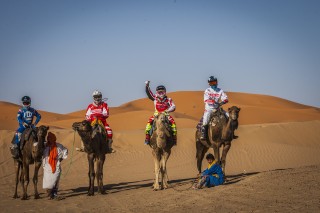 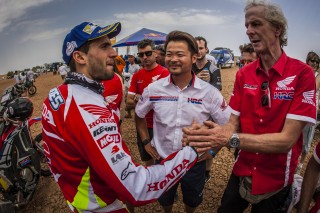 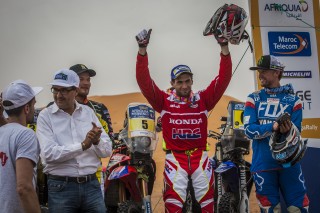 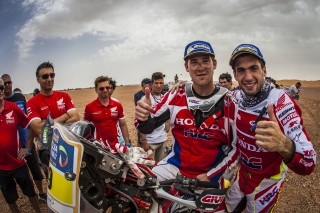 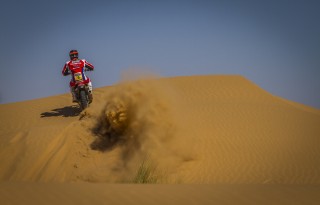 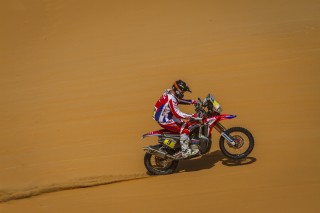 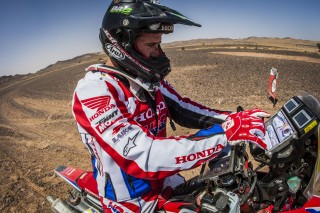 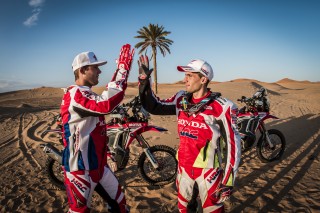 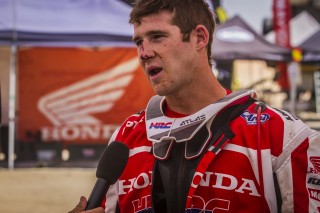 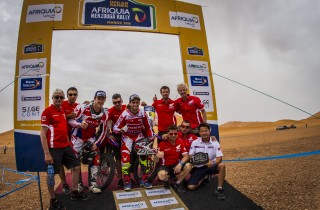 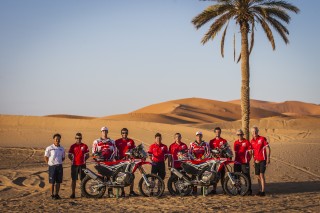 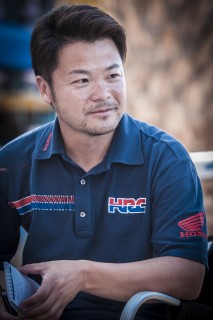 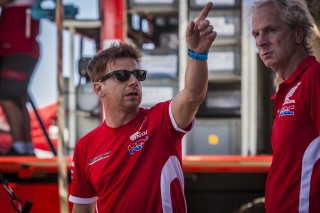 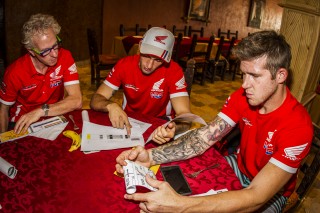 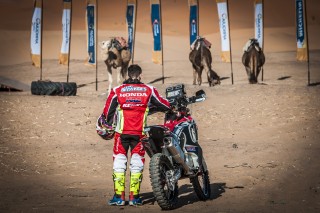 Team HRC’s Argentinean rider Kevin Benavides has sealed overall victory in the Afriquia Merzouga Rally, which closed today in the dunes of Merzouga. Benavides kept the field in check after the motocross-style start, crossing the finishing-line in second place. Brabec posted sixth on the day as well as sixth in the general rankings.

It was the first race as part of the official HRC team and a first win too. The budding young Argentinean shone throughout the whole week and stormed to an overall triumph in the Afriquia Merzouga Rally. The back of the victory had been broken in the dunes of Morocco’s Erg Chebbi.

Benavides had placed himself in a virtually unbeatable position yesterday ahead of today’s final stage which got underway with a motocross-like start in the Lago Yasmina Erg Chebbi area. The wins in stages three and four consolidated the Argentine’s domination of the event and paved the way for today’s celebrations in the Team HRC camp.

This is the second time Team HRC have clinched the Merzouga Rally title. In 2013 it was Briton Sam Sunderland who took the Honda CRF450 RALLY to the top step of the rostrum.

Benavides’ Team HRC companion Ricky Brabec (U.S.A) wound up in sixth place overall, improving daily with such a steep learning curve of tough navigation. The apprenticeship in navigation has been the rider’s main goal over the course of the five-day rally.

The next outing for Team HRC will be the third round of the FIM Cross-Country Rallies World Championship, the Sardegna Rally Race. Kevin Benavides once again participates, this time under the auspices of Team RS Moto. 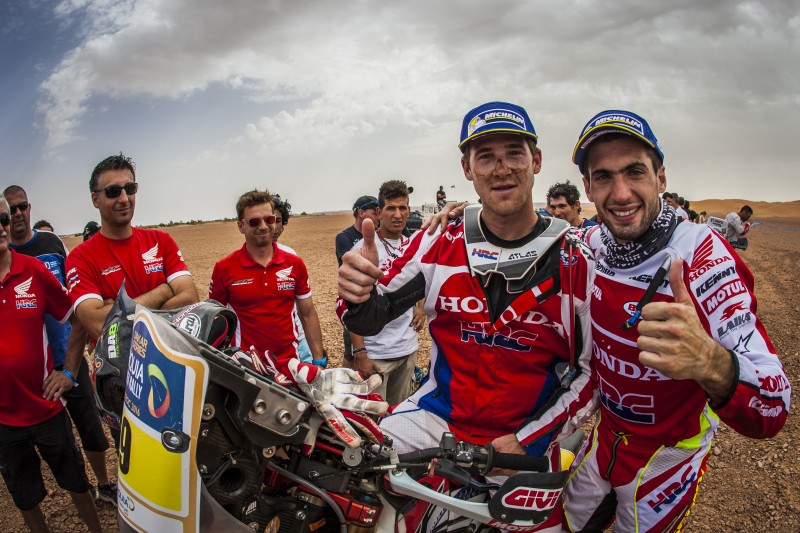