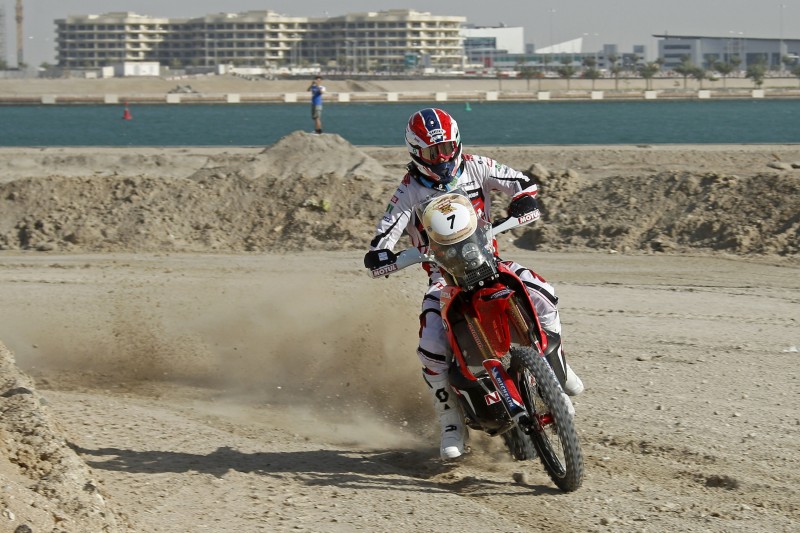 Joan Barreda proved to be the fastest in the Super Special at the Abu Dhabi Desert Challenge, the first test in the FIM World Championship of Cross-Country Rallies. Paulo Gonçalves finished in fifth and Hélder Rodrigues sixth.

It was an excellent start for Team HRC at the Abu Dhabi Desert Challenge with an important win for Joan Barreda, which will allow him to choose the starting order for the first stage of the rally. As the dunes will play such a crucial role in the stage, starting a few positions from behind could be to the team’s advantage.

Today’s Super Special might have been a mere 2.5 kilometres long, but it proved to be a spectacular one all the same, taking place in the close vicinity of the Yas Marina Circuit. Barreda once again showed his pace and clocked up a time some two seconds over his nearest second place rival.

The top positions were fiercely disputed with current champion Paulo Gonçalves finishing in fifth very close to his rivals. Hélder Rodrigues crossed the line in sixth after a light fall on a sharp corner.

"It was really good. I only made a slight mistake on the start of the lap and I dropped one or two seconds. After that I felt really good. I kept pushing for the whole lap and in the end I picked up a nice victory, which is great for tomorrow as we can start when we want and we’ll try to get off to a good start tomorrow."

"I tried to be fast but the course is short so I tried to be quick and not take any risks because it’s important to be in the top five tomorrow. I think that it’s really good that I finished in fifth really near to the winner who was Joan Barreda. Tomorrow the real race starts and we’ll all push to try and keep in a good position tomorrow as well."

"It was very fast and very close today, and I had to take the corners very quick. I tried to go too fast and I made a slight mistake and I finally made sixth place, which I think was good. Joan won so he’ll be in a good position to start tomorrow. The race is long and I’m looking forward to the race tomorrow."

"It was a very good stage for Team HRC. We won with Barreda which is very good because tomorrow we can choose which is the best starting position for him, which will of course be last in order to have a good race direction. It was a great strategic race for us. A fine result and a nice start, as it is always good to start the race in the right way ahead of such an first important stage tomorrow here in the Abu Dhabi desert challenge. Helder and Paulo both had a good stage. Everyone got on well with the bike and the team is doing a very good job."

"A short close Special very close to the Yas Marina circuit here. The guys did a good job with Joan winning today and getting his preferred position for tomorrow. Paulo and Helder did fine so we will see how it goes in the first real desert day tomorrow. Now it’s up to the guys to do the right technical thing, navigate well and have a safe a race as possible." 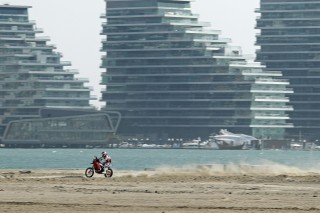 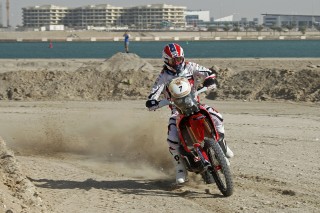 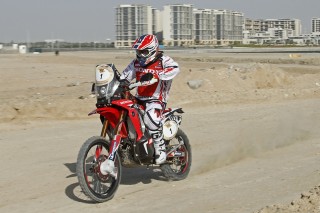 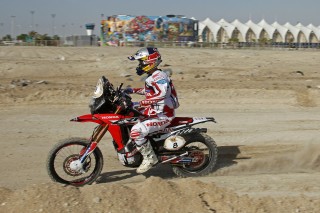 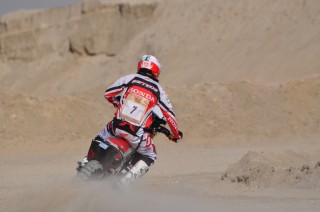 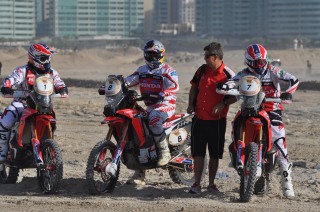