Team HRC got off to a flying start in the 2014 edition of the OiLibya Rally of Morocco, with Joan ‘Bang Bang’ Barreda on the Honda CRF450 RALLY securing victory in the race’s first timed special. Team HRC side-kick Paulo Gonçalves finished not far behind in runner-up position giving Honda their first one-two.

Joan Barreda becomes the first leader of the OiLibya Rally of Morocco, in this, the sixth and final rally of the FIM Cross-Country Rallies World Championship. The Spanish rider set a cracking pace over the 276 kilometres against the clock, in a stage that covered both hard track and rocky terrain, and even included a first incursion into the dunes. Such was the speed over most of the stage, that not even a minor loss of route in the later part was able to stop the Team HRC rider crossing the finish-line in first place.

Joan Barreda’s win was reinforced by team-mate Paulo Gonçalves who made it a Honda double. ‘Speedy’ kept his distance from Marc Coma who started out from behind the Portugese rider, but was never able to get past him. Coming in behind Coma, in fourth position, was yet another Team HRC component, Hélder Rodrigues, who performed well over the special.

Team HRC debutants, Jeremías Israel and Laia Sanz managed to finish among the top thirteen finishers on their first outing on the brand new Honda CRF450 RALLY. Jeremías finished with a tenth place, and Sanz a note-worthy thirteenth.

After the first getting stuck in the sand, competitors will face again the Erg Chebbi in crossing from south to north: a novelty on this OiLibya Rally of Morocco 2014. Arriving south of the erg the rally separate into two ways. On one side the bikes will make a big crossing of dunes with multiple changes of direction. To the east, the cars & trucks will have to find their own way. Everyone will end up at the exit of the erg. Photographers will be many at this crossing where vehicles will flow on all sides. Then the rally will end up in the oued and competitors will have to find the pass that will take them on arrival.

"Today was a hard day for the start of a rally. We came across dunes, very stony areas, and difficult navigation. I started from behind in fourteenth place, and I came up against some slower riders who it was very difficult to overtake. Here we are. I’ve finished in second. It was very hard to stay in front because all the riders were pushing so hard."

"I didn’t want to take any risks on the first day of the rally. I rode a consistent race. I had a minor problem with the roadbook and that’s why I tried to get through the stage without taking any chances. It’s a good position to begin tomorrow’s stage from, and I’ll be trying to make up a bit of time."

"Today was a complicated stage, with a bit of navigation at the beginning that I got through without problems. It was a very varied stage with fast ground and some dunes, and I’m very pleased to have made it to the end without any setbacks. Physically, I felt great on the bike, I’m getting a feel for how it reacts, and I’m thrilled to be riding for Team HRC. I am gaining confidence as I go and should be at my full potential soon."

"Today was a good stage – it’s important to make it through to the end of the stage without any problems. Today I had to open the race which was something that I hadn’t ever done. The first few kilometers were tough, but some of the top riders started to overtake me, so I kept calm because there was a lot of dust and a lot of danger. The important thing is to pick up a good rhythm and learn."

"So, we had a very nice first stage in Morocco. Joan was able to win the stage. A very satisfying reward for all the work of testing and setting up the new bike. Also, Paulo has a nice stage finishing in second, and Helder fourth. Also Laia and Jeremias had decent stages and rode well, so everybody is confident so far and we are looking forward to preparing the next stage." 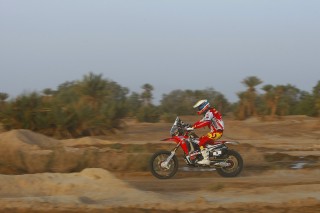 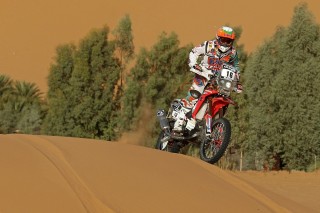