After the longest special stage of the Rallye du Maroc, two Monster Energy Honda Team riders will bid to make it onto the final podium in Zagora tomorrow.

Riders were today once again faced with high-speed, undulating, stony and sandy tracks, with some broken-up ground and even some trial-style areas. There were constant dangers present on a route which covered some stretches that had been covered over the preceding days. The amount of dunes today was negligible. A 118-kilometre liaison section led the riders to this morning’s starting point for the 367-kilometre special stage, the longest of the entire Rallye du Maroc. By the end of the special, there were just 61 kilometres left to reach the Tizi bivouac located in Zagora.

The day proved to be a good one for Pablo Quintanilla, who rode a solid stage and finished with the third best time of the day. The Honda CRF450 RALLY rider confirmed his second overall place in the rally. The Chilean has one day left tomorrow to attempt to attack and reduce the 37-second gap that separates him from first place.

Joan Barreda finished fourth today despite a heavy fall on a boulder. The rider from Castellón had been notching up fine times until that point. In the general standings, however, any podium chances had faded in yesterday’s stage.

American Ricky Brabec, after opening the way for a large stretch of today’s stage, will also be in contention for the overall victory tomorrow. He is currently lying seven-and-a-half minutes behind the leader with 166 kilometres still to run. The American will go all out to complete the task.

It was a very tough day today for José Ignacio Cornejo, who suffered a major fall in the opening kilometres of the special, sustaining a chest injury. However, in spite of the severe pain, the Chilean battled on to the finish, but having to ease off the gas. After a medical check-up back at the bivouac, the rider was declared fit enough to start the final Rallye du Maroc stage tomorrow.

The final day of racing will feature a shortened route of 166 kilometres of special stage rather than the originally scheduled 291 kilometres with race organizers citing logistical issues. The race will play out over the same area previously used on stage one.

Today was a long day and maybe it wasn't the day to open. We lost a bit of time but we still have a day to go and we're seven minutes off first place. We can make a good push and maybe get onto the podium tomorrow: that will be the plan. It's been good training ahead of the Dakar. We'll keep our hopes up and push for one more day. Today I opened a large part of the day and we had the same track as the previous days, but with a lot of detours which made it very confusing. We will keep pushing tomorrow.

At the start I felt pretty confident as we were going over tracks from the previous days. At kilometre 8 I didn't see a large pothole, I went in hard and lost control, taking a heavy blow to my chest area. I felt a bit sore, but I kept going until the refuelling. In the second part, when I cooled down, it was causing me a lot of pain and I had to slow things down considerably. But I made it to the finish. I’m going to try to recover so that I will be able to finish the rally tomorrow.

We finished the penultimate stage of the race and like almost every other day, it was a long and hard stage. I'm happy, I felt great, with a good pace and without any navigation mistakes and that's very important for my confidence. I'm second in the general standings, just slightly behind the first. Tomorrow we will go out to do our best on this last day. There will be less than 200 kilometres and so we’ll have to see what happens.

I started from a bit further back today, but today it was a very fast stage. It wasn't easy because there were some complicated areas, but I managed to find all the waypoints. I rode with Skyler for most of the day and it was positive. The objective was to ride and experiment with things on the bike and I think that this, as well as the previous week that we had here, has been some top quality training in the desert.

Yesterday Ricky gained more than 12 minutes on his immediate rivals (Walkner, Quintanilla and Sanders), today he opened the track on a very tough day of navigation, with tracks from previous stages, difficult rivers, camel grass and a lot of stones. It was a very complete stage where he did well, but lost a lot of time. He's now seven-and-a-half minutes behind the race leader but I think it should be possible to make up that time tomorrow on the stage down to M'Hamid. However, the stage has been shortened because the organisers think it is better for safety reasons, as they prefer not to have vehicles in the dunes on the final day of the race. Pablo had an excellent day, third, and in the general standings he is some 37 seconds behind. Tactically, it will be very good for him to start behind his adversary with such a gap. Pablo is doing well and I'm sure he will fight hard to win the race. Joan and Nacho started further back; Cornejo had a fall but was able to make it to the bivouac. Barreda also had a bad crash but finished fourth. Because of yesterday's penalty he won’t be in the fight for the podium, but he feels good. The objective is still to train, learn and improve so as to arrive at the Dakar in the best possible shape. I'm pleased with the whole team because everything is going very well. 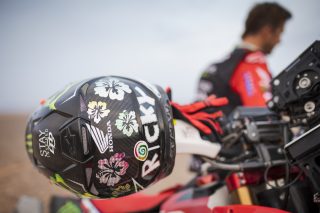 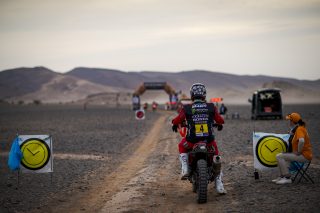 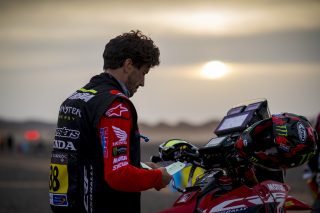 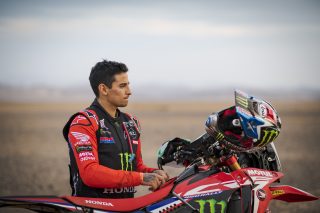 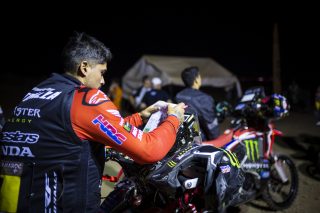 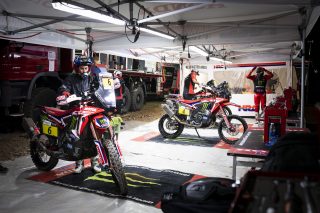 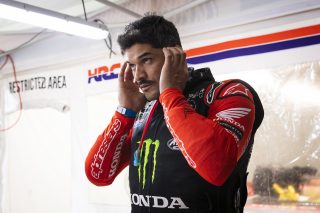 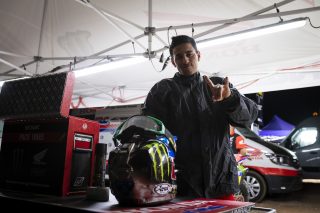 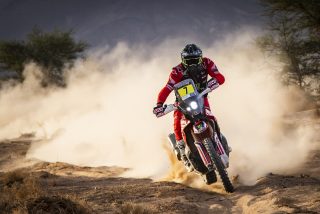 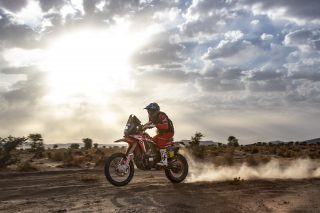 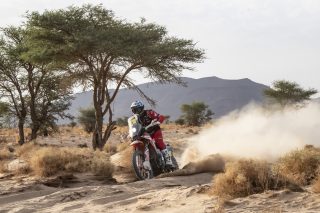 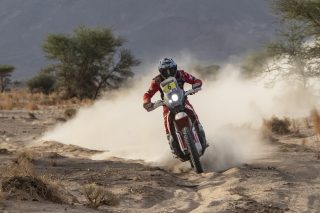 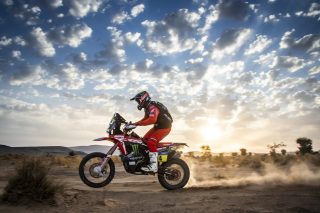 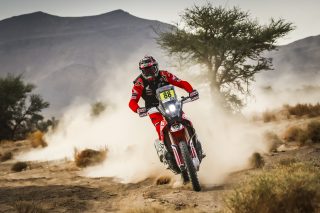 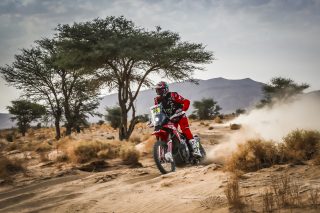 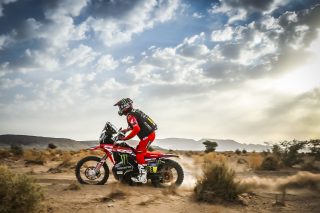 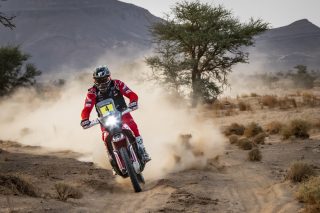 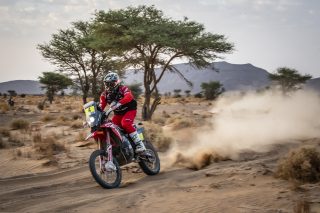 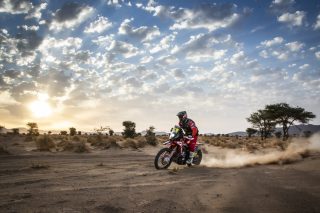 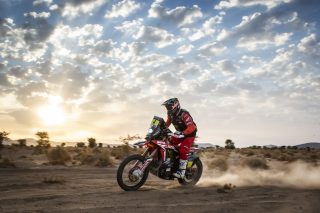 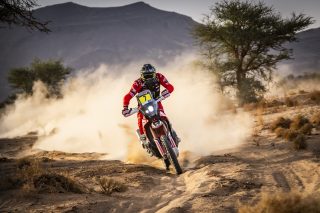 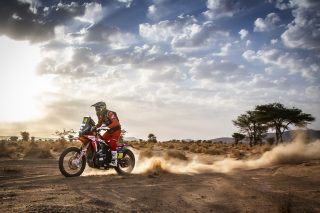 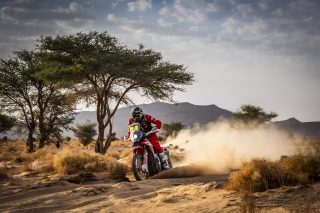 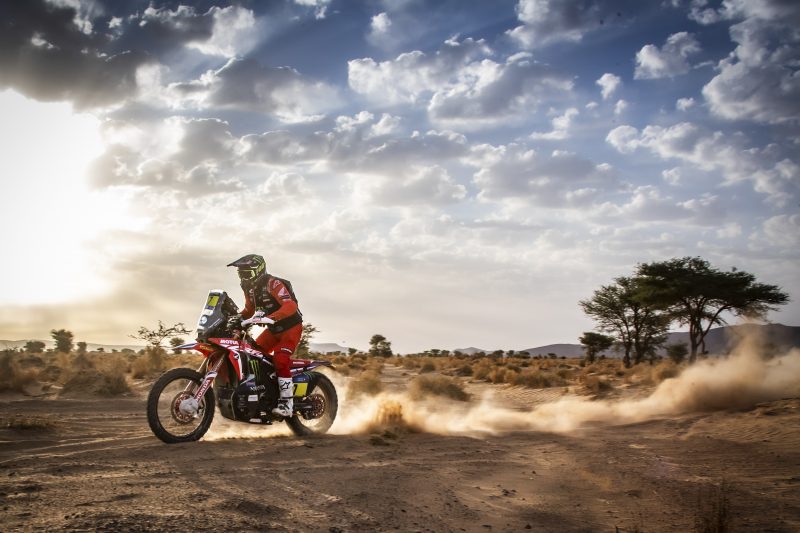